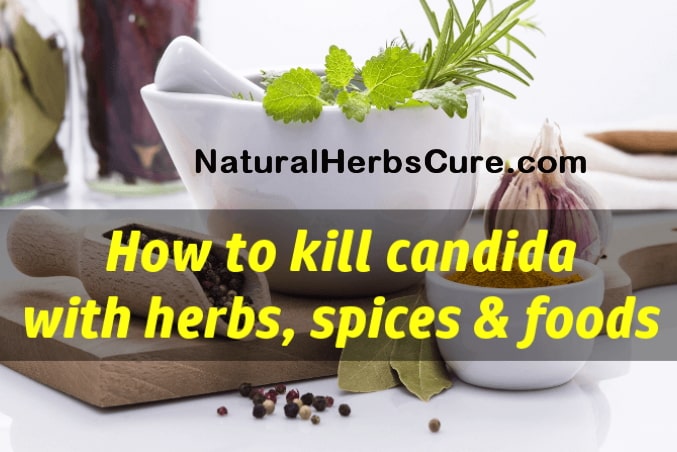 How To Use Antifungal Foods, Spices & Herbs To Cure Candida Fungal Infection Naturally And Permanently

Steps To Getting Rid Of Candida Infection Quickly?

An example of such is Candida, a fungus which is found in the body ?in places like mouth and genitals (mucous membrane) and intestines. Ordinarily, this fungus is completely harmless but when exposed to extreme conditions which are right for its growth it usually grows out of control, leading to disorders and ailments for the body system. This condition is known as Candidiasis.

Candida is more common among kids, aged individuals and those undergoing treatments or with a weakened immune system. It is often accompanied by symptoms and effects which range from mild such as small rashes to more severe ones that pose serious health threats. But thanks to science and adequate medical research, there are effective methods both naturally and OTC, which have been found to be very efficient in taking care of the disorder. This article gives a detailed analysis in the symptoms of Candida, natural herbs for its treatment and effective ways of getting rid of it permanently.

Excess growth of the candida fungus which is known as Candidiasis is common in three sites in the body which include the mouth, genital area, diaper area for kids and digestive tract. A more severe case of Candidiasis is when the infection makes its way into the bloodstream which is invasive candidiasis. Symptoms of this various types include;

Cracks in tongue and internal areas

White/Yellow patches found on the tongue

Inflammation and Swelling of the Vagina (Women)

Invasive Candidiasis is when the infection makes its way into the bloodstream, the symptoms include fever and a feeling of cold. Invasive candidiasis often misdiagnosed.

The use of Aloe Vera for treatments of several conditions has existed for centuries. This wonder herb which is capable of external application to beautify and nutrify the skin and other external conditions. It can also be prepared and taken internally in the form of herbal drinks and tea; it is capable of curing several bodily disorders of which one is candida, and its overgrowth otherwise known as Candidiasis. Aloe Vera has strong components which not only stop the candida fungus from over growing but also destroys its protective shield thus completely getting rid of it.

This kitchen spice is also very effective in curbing candidiasis and preventing the infection from spreading to other parts of the body. Turmeric is rich in an exceptional ingredient called Curcumin; Curcumin is capable of offering several health benefits to the body which includes reversing of inflammation, boosting metabolism, antioxidant properties, and antifungal abilities, which make it very useful in curing candida. Turmeric

Oregano Oil is one of the most effective herbs for efficiently getting rid of Candidiasis. This common household herb is rich in an element called carvacrol. Carvacrol is capable of several positive effects in the body, helping it to cure ailments and prevent infection from external bodies. It is also very effective in dealing with candida. Carvacrol cures candidiasis by destroying the protective shield around the fungus, thus leaving it naked and ultimately leading to death. Oregano Oil has been researched to be very effective.

Ginger is a very common herb; it’s quite normal to see various health professional and other individuals encouraging its consumption on a daily basis as it offers several health benefits. Ginger can also be used to cure candidiasis. Its antifungal properties help strengthen the immune system and aids killing of this fungus cells quickly while also aiding detoxification.

The use of black walnut is treating candidiasis not very common as there has not been adequate research to prove how effective it is, and how it curbs candida overgrowth. Nonetheless, observation and testimonies from many of its users have proven that this herb surely has antifungal properties that are very effective in curing candidiasis.

Anise is a plant of European and Asian origin (Eurasian). It seed which is commonly known as aniseed is a common ingredient used in the flavoring of drinks and candies. This seed also has strong antifungal abilities which make it a very strong agent to effectively deal with candida. Anise seed can be gotten at local stores and included in meals to battle overgrowth and development of the fungus in the body.

The use of lemon is a favorite among many individuals hoping to get rid of the candidiasis. This is because lemon is relatively cheap, easy to get and has varieties of consumption choices thus making it very effective and appealing in getting rid of Candidiasis. The most common method is through the use of lemon juice whereby fresh, natural lemon juice is consumed regularly to kill candida, particularly in the digestive tract.

How To Get Rid Of Candida Infection Quickly

Completely getting rid of Candida can be a very ?strenuous process. This is because the common treatment methods which often includes over the counter pills are not capable of destroying the fungus, and cleaning out of its leftovers, in the form of dead cells. This makes the condition a reoccurring one, especially in women who show more severe symptoms, and this is bad for health. We have therefore decided to compile a detailed analysis of the process to effectively get rid of Candida in a few weeks and preventing its reoccurence.

Increase the number of healthy bacteria

There are millions of bacteria in the body system; this includes the good ones and the bad ones. The good ones are usually more in number and contribute to the optimal functioning of the body. In the case of Candida, whereby there is an influx in the quantity of these unhealthy fungi in the body, it is important to reverse this by supplying the body with healthy bacteria to counter this effect.

The healthiest and most beneficial approach to getting this healthy bacteria into the body is through natural means which includes the consumption of probiotic foods and herbs. Ginger, Turmeric and some other herbs and apple cider vinegar are all sources of healthy bacteria which is very effective in curing candida and aiding the detoxification process.

Get rid of the unhealthy bacteria

The use of coconut oil should be employed in achieving this. This herb has strong antifungal properties that efficiently get rid of the candida cells. Its elements which include caprylic acid, lauric acid, and healthy fatty acids in the body target this fungal cells of candida and kill them.

Coconut oil is also very effective in flushing out of dead bacterial cells (waste) in the body, although in minute quantities. The regular use of coconut oil is often accompanied with minor side effects like mild stomach ache which passes over, over time.

Proper nutrition is also very vital in getting rid of Candida and preventing its reoccurrence. Firstly, foods which aid detoxification of the body by helping to get rid of waste in the form of feces should be consumed for at least a week. This is because after Coconut oil does well to kill the unhealthy fungus, the dead cells accumulate in the body system which is somehow toxic. It is, therefore, necessary to get rid of these substances and detoxify the body system. Diatomaceous Earth Powder or Charcoal are great options in achieving this.

After that has been completed, then proper diet should be ensured to supply the body with adequate nutrients to boost its functioning and immune system. This helps the body recover fast and overcome the symptoms of Candida. Food types such as vegetables, fruits, and whole foods are a good choice. It is important to stay away from sugary foods as this feeds the unhealthy bacteria.

Following the steps listed above guarantees quick and effective rid of Candida in a short period of time.

How To Kill Candida With Apple Cider Vinegar

Research and years of use have proven apple cider vinegar (ACV) to be very effective in getting rid of Candida. This is because Apple cider vinegar is naturally antifungal and acidic, thus killing the fungus and providing an environment unsuitable for its survival and reoccurrence in the future.

The are several ways by which ACV can be used depending on the severity and site of infection. For oral infection (Thrush) one can gargle on ACV. For intestinal and digestive treatment, ACV can be taken along with meals or taken as a tea. For candida infection in the skin ACV can be diluted with water and used to bath, all of which is very effective and ensures killing and stop reoccurrence of Candida.

How To Cure Candida With Baking Soda

Baking Soda is also very effective in getting rid of Candida as it has antifungal abilities and is also alkaline in nature, thus changing the nature of the digestive tract and making it unsuitable for growth and survival of Candida. The process of using baking soda to cure candida is one that stretches through a period of two to three weeks, and it guarantees quick and effective results.

As was stated earlier, candida is one of the several bacteria that is found in the body system, it is an essential element for normal body activities such as digestion, but when it is in excess, it can lead to body disorders. The condition whereby the candida fungus overgrew and is in excess in the body system is known as Candidiasis. The symptoms listed below are a sign of Candida Overgrowth in the body system.

Apart from the symptoms listed above to diagnose candidiasis, this test can be taken under the supervision of a professional to check for Candida Overgrowth.

Can Candida be cured forever?

Disorders and irregularities in the body are inevitable but there are proper steps and measures to reduce the effects of these disorders and minimize their occurrence, so isthe same in the case of Candida.

This condition which is characterized by the Overgrowth of a particular type of fungus can be reversed through several measures which involve killing the bacteria, boosting of healthy ones and adequate nutrition to detoxify and strengthen the immune system.

Its re-occurrence is common, but there are measures to adhere to, to ensure symptoms go unnoticed and does not affect the body system. This involves making sources of healthy bacteria a regular part of meals, regularly detoxifying the digestive tract and avoiding conditions that may boost the growth of this fungus.

So, although candida cannot be cured forever as it is an essential part of the body system, there are measures to prevent its Overgrowth, which is the form when it is unhealthy to the body system.