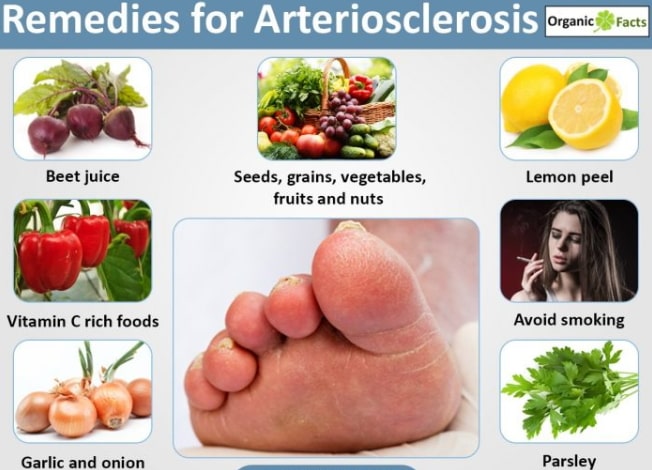 The aim of this article is to specify some natural treatment methods for arteriosclerosis, including the best home remedies. But, before that we shall take a look at what arteriosclerosis all about and how it happens.

Etymologically, arteriosclerosis is a?combination of two words: arterio-, meaning relating to the arteries (blood vessels that convey blood from the heart to other parts of the body), and sclerosis, which is an abnormal hardening or thickening of soft tissues.

From, the above analysis, we can define arteriosclerosis as a medical condition in which the walls of the arteries begin to get thick or hard, thus making blood flow difficult through the affected arteries. As a result of the restriction in blood circulation, organs in the body become affected as sufficient blood is not able to reach them.

There are three major forms of arteriosclerosis, namely:

Having an understanding of the three major types of arteriosclerosis, you also need to have it in mind that a person can be affected by all three types at the same time. In such a case, the different forms of the disease are found in different blood vessels.

The exact cause of arteriosclerosis remains unclear; however, the condition begins when the endothelium ? the inner linings of the arteries ? gets damaged. This damage may be as a result of various causes, such as smoking or high cholesterol levels in the blood.

We have already established the fact that arteriosclerosis begins with a breakdown of the endothelium, which may be caused by various factors. With that said, the following are some of the major factors that increase the risk of developing arteriosclerosis:

Arteriosclerosis is regarded to be a long-term condition, i.e. it begins from childhood and progresses as a person grows older. Thus, at the early and mid stages, arteriosclerosis usually does not show any noticeable symptoms. The symptoms of arteriosclerosis only begin to be noticed when the arteries get blocked to the extent that blood supply to an organ is almost completely cutoff.

Also, symptoms of the disease will also depend on the location of the affected arteries. That said, the following are symptoms of arteriosclerosis, based on the type of arteries affected:

Coronary arteries (arteries of the heart)

That said, diagnosis for arteriosclerosis involves various tests and scans, including blood tests and CT or ultrasound scans. Other tests used for diagnosing the disease are EKG (electrocardiogram) test, ankle brachial index test, and stress testing.

Diagnosis of arteriosclerosis usually depends on the possible location of the symptoms of the disease. The diagnosis begins with the doctor doing a physical examination of the probable site of arteriosclerosis and/or symptoms location. Along with the physical examination, the doctor will also ask you some personal questions such as your family health history, age, lifestyle, and others.

There are various conventional treatment options for arteriosclerosis, including surgery. However, the most effective way of dealing with and preventing this disease is through a combination of lifestyle changes and management of the manageable risk factors.

The following are some herbal remedies and lifestyle changes that can help in reversing, as well as in preventing arteriosclerosis.