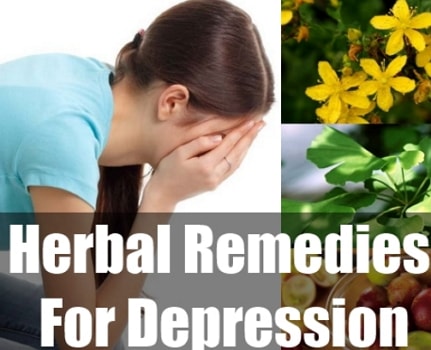 Natural Herbs To Cure, Treat Depression At Home By Yourself

Depression is a prevalent mental and emotional disorder in the developed world compared to any other. It is also catching up in the developing world. The statistics show that every year there are over 19 million cases of Americans suffering from major depression disorder (MDD). While this disorder can affect any age, the age most affected is generation ?Y? which is the active generation.

Depression tends to disrupt your life entirely by affecting your feeling, thoughts, mood, behavior and most of all physical health. It not only interferes with your life but also it affects the lives of those around you.

Despite all these, you should by no means allow depression to hold you bound.? Arise and take a step towards your recovery. Your recovery option could be herbal remedies.

There is a wide variety of herbal remedies for depression. The best thing about herbal remedies is that they generally don?t have a side effect. But, because of different bodies? mechanisms, some might react differently from one person to the other. If they do, there will only be slight side effects which can easily be overlooked compared to the benefits they have on you. You can use these herbs to correct your emotions and your physical status.

There is a new research report that supports using St. John?s wort for treating depression. The report shows that the plant extracts are effective for treating both mild and moderate depression. You cannot compare St John?s wort with other standard conventional antidepressants. It is more superior with practical results in treating depression. It has a long history of use by herbalist as folk traditional medicine for depression which goes back upto 1600s. In Germany it is a prescription medicine for this disorder. In comparison to standard antidepressant, it has fewer side effects.

Caution should be taken while using St. John?s wort while on other prescribed medicines. It interferes with the effects of birth control pills, HIV drugs, and cancer medications. Using St John?s wort with antidepressants leads to serotonin syndrome due to increased serotonin levels beyond what is required. You might therefore need to consult your doctor while intending to use St. John?s wort.

Using lavender essential oil through smelling will relax your mind. It is more effective using the extracted oil from its flowers than using the flowers themselves. Smelling lavender flowers oil relaxes the mind. Depression is all about mind relaxation.

Rhodiola Rosea is also known as Crassulaceae grows perennially in cold regions and can be found in the alpine areas of the Northern Hemisphere. Russians and Scandinavians use it as a prescription herb medicine. A clinical test of Rhodiola Rosea found out that its extract SHR-5 contains effective antidepressants that can correct mild to moderate depression. The extract is not known to have any adverse side effects and therefore safe to use. Even though intensive research on this herb is still in progress to show its mechanism in treating depression, the result of its use showed significant improvement.

Rhodiola Rosea is packed with other benefits which include sexual function, cognitive function, and good mental and physical performance even under stress.

Ashwagandha is popular among the Indians for its use as Ayurvedic medicine. The reason this plant is considered to be one of the best herbal remedies for depression, is its chemicals known as adaptogenic compounds. These compounds can effectively relieve depression symptoms and it is highly valued in treating many other health issues as well.

Oral administration of Ashwagandha for five days is the same as taking antidepressant prescription like Imipramine. It has no known side effect and therefore safe to use.

Camu Camu plant is known to grow mainly in the tropical rainforest especially in the Amazon River Basin. It yields berries-like fruits which have lemon-taste and contains vitamin C among many nutrients which are good in fighting off depression symptoms. Camu Camu also contains adaptogenic properties that effectively normalize the process of the body during depression and relieves the symptoms too.

Camu Camu is known to be the second most potent plant that contains natural compounds for the antidepressant. Using Camu Camu is quite safe as it does not contain any adverse side effects

Maca is known to contain lots of phytonutrients, vitamins, amino acids, and minerals. It is a herb that has been in use as a traditional medicine for centuries. Maca comes in different colors but the best of them all is the Red Maca. Within a month of taking Maca, it is enough to reverse depression permanently.

The dosage of taking Maca should be consistent for at least one month or longer as you please since it has no harm. An adult of 65kg should take 3 to 4 teaspoons or 9 to 12 grams in powder form.

The best thing about Maca it does not have any side effects.

For many centuries, Peruvian women have used Maca as a traditional medicine for treating menopausal depression.

Ginkgo extract is popular in Europe and it is widely used for depression, mental confusion, memory loss, anxiety, and other mental health issues. It is sold over the counter under prescription.

In the U.S. it is sold as a nutritional supplement with a standardized extract from its dried leaves. It is known for its powerful boosting neurotransmitters and also for fighting harmful free radicals. It is useful in treating depression because it enhances the uptake of two neurotransmitters dopamine and serotonin which are typically low when suffering from depression.

A regular ginkgo dose is 40mg x 3 = 120mg per day. It is advisable to take with your meals so that you may avoid gastrointestinal problems. Start with a low dose and then increase the dosage gradually up to 240mg per day for better therapeutic results.

These are just a few herbs among many that are beneficial in treating depression.

Reaction to any of the herbs will depend on each case and per individual?s mechanism. However, you might need to discuss any of these herbal treatments with your doctor or your herbalist.

Go for nature and be free!.