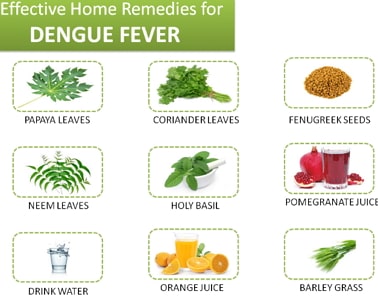 According to the U.S. Center for Disease Control and Prevention, about 400 million people are infected with dengue fever every year. As if that is not enough, there is an estimated 2.5 billion people in the world that are at risk of contracting dengue.

With the statistics above, it goes without saying that dengue fever is one of the leading endemic diseases in the world. Including the fact that there is currently no cure for dengue fever only increases the fear of contracting this disease.

Although there are no do-it-all treatments for dengue fever, several treatment combinations can be used to remedy the secondary symptoms. In this article, we shall take a look at natural ways of treating and preventing dengue fever.

What is dengue fever?

Dengue fever, which is also known by different names such as dandy fever or breakbone fever, or simply dengue, is a viral infectious disease that is transmitted by a particular species of mosquitoes and is characterized by rash and aching joints and headaches.

Dengue is common in tropical and sub-tropical regions of the world, such as tropical Africa, parts of Asia, Central and Southern America, Northern Australia, and the Caribbean.

Dengue fever can occur in rural areas as well as in urban areas, unlike malaria which mostly affects rural dwellers.

As already stated, dengue fever is a viral infection that is transmitted via the bite of mosquitoes. There are four dengue-causing viruses belonging to the Flaviviridae family and Flavivirus genus that also includes the yellow fever virus.

The specie of mosquitoes responsible for the transmission is the female Aedes aegypti. Another vector of dengue fever is Aedes albopictus (Asian tiger mosquito), which is native to Asia but has now spread to other parts of the world including Europe and North America.

Signs and symptoms of dengue fever

According to report from the WHO (world health organization) website, dengue symptoms usually start after 4 to 10 days of the mosquito bite ? the incubation period. The symptoms can last for between 2 and 7 days.

When a person has dengue fever, one of the first noticeable signs is the sudden onset of fever, which is followed by intense headache and aching in the joints or pain behind the eyes. In addition to these symptoms, other symptoms may be present, depending on the severity of the fever.

Some of the common symptoms of dengue fever are:

Severe dengue fever is a life-threatening condition that comes with signs and symptoms including persistent vomiting, extreme fatigue, and severe pain in the abdomen.

Perhaps, the best and most effective method of preventing dengue is to avoid getting bitten by mosquitoes. No matter, there are other preventative measures that can be taken to reduce the risk of developing dengue and include:

Although there is no cure for dengue fever, the following natural herbs and methods can be used to reduce the symptoms of the disease.