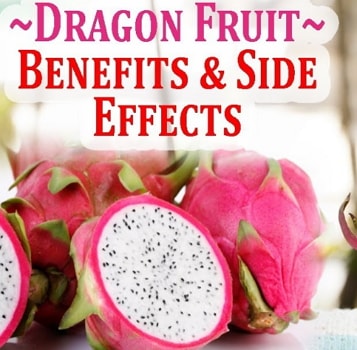 Dragon fruit is an exotic fruit that has its origin in the pleasant tropical climates of various parts of the world. Specifically claimed to have originated from Mexico, dragon fruit is starting to become a favorite and has made its way into the limelight. With a unique appearance that is characterized by outer red body overlapped by green scales, it derived its name as ?Dragon? fruit and is now known for its appealing taste and nutritional benefits.

Dragon fruit is commonly called pitaya and is a product of a plant known as Honolu Queen and has other varieties but they are less popular. Research has shown that this fruit has nutritional capabilities to keep the body functioning at an optimal pace and prevent bodily disorders and diseases.

A once ignored fruit which is now extremely sought after, dragon fruit has the ability to provide that extra burst of nutrition the body needs, therefore this article updates you with the nutritional facts, health benefits and side effects when in excess of dragon fruit.

Dragon fruits has a lot of healthy components which give it the ability to provide the body with essential nutrients it needs for proper functioning while also helping in the fight against diseases and disorders such as digestive, cholesterol problems and also a perfect tool for everyone looking to shed some weight.

It’s major components include carbohydrate, protein, fibre and the less common lycopene. It also contains essential vitamins such as vitamin C, vitamin A, B vitamins ( B1 and B2) and complements it with richness in minerals such as iron and little quantities of phosphorus, sodium and calcium.

How To Eat Dragon Fruit And Common Recipes

It might seem like an absurd topic teaching someone how to eat a fruit but dragon fruit has managed to stay behind the scenes over the years and so it is normal to be unfamiliar with the fruit. This is attributed to its exotic nature having been placed in the high quality section of most stores and an appearance which might seem intimidating at times but once you get over all that and get a taste of this juicy fruit, you’re bound to come back.

One of the best ways to eat dragon fruit also known as pitaya is raw when it is freshly picked or stored in a cool place.

Underneath the intimidating and scaly outer part lies a juicy inside filled with fleshy substance and black delicious seeds. To enjoy it at an optimal state the fruit should be sliced into two to expose the inner part and a spoon or any utensil of your choice can be used to scoop it out and viola! you get that burst of deliciousness.

Depending on individual preference you can decide to garnish it with honey or any sweetener of your choice, nonetheless, an amazing experience is guaranteed.

Due to its juicy and soft nature dragon fruit is a favorite when it comes to the non-conventional ways of spicing up your salad.

After removing the scaly outer parts the fruit can be sliced into any small sizes and mixed with other fruits and vegetables to make a salad.

Although it can be used for frozen salad it is most nutritious at its fresh state even though freezing locks most of the nutrients in. Its low cholesterol and fat content combined with its nutritious value and other fruits makes it the perfect meal to start the day with.

Making of smoothies is a favorite when it comes to the uses of dragon fruit. This exotic fruit has a refreshing and amazing taste on its own but when it is blend with other fruits and mixed with extra ingredients such as milk or honey and so on, it becomes a power pack of great taste and nutritious value.

Bananas, apple and strawberries are one of the best combos for this healthy morning juice but other fruits can also be used according to preference.

It was mentioned earlier that dragon fruit is best consumed at its fresh state which is definitely the truth but one cannot ignore the refreshing taste of a chilled mashed up juicy fruit that is a favorite in cooling the body especially in the hot summer.

Although it would required a relatively low temperature to keep the fruit almost ice cold at all times to prevent spoiling, everything is easy there on.

The fruit is sliced and the outer layer is gotten rid of, you can then chose any method of your choice to mash it up and after that the fruit is stored in a refrigerator.

This is still the most significant use of dragon fruit apart from its nutritional content and amazing taste. Its relatively low calorie content combined with amazing nutrional value makes it a great alternative for anyone looking to shed some weight. This is because it helps to provide the body with essential nutrients without having to bother about weight gain associated with high calorie content.

Dragon fruit is rich in element such as carotene and some vitamins especially vitamin C which give it antioxidant qualities and makes it efficient in preventing cancer and reversing it symptoms.

Its consumption also helps in reducing inflammation in various parts of the body but it has its effect mostly on the prostate, hence majorly dealing in prevention of prostate cancer in men.

One of the major components of dragon fruit is Vitamin C, an element which is very important in protecting the body against diseases. The way this works is that the vitamin stimulates aggression against toxic substances in it without harming healthy cells or bacteria thus preventing chronic conditions such as heart diseases or development or cancerous cells.

This further strengthens the immune system while giving it energy to perform other metabolic activities at an optimal pace.

Dragon fruit is rich in fibre and this aids digestion by preventing cases of irritable bowel movement, constipation, indigestion, bloating and inflammation in the digestive tract hwhich might lead to development of cancerous cells amongst other things.

To further simplify how its rich content in fibre helps ease digestion, fibre is made up of complex substances and so it takes the body some time to break it down thereby helping to bulk up substances in the stomach which would have otherwise moved freely and without regulation, leading to constant uncontrollable bowel movement.

Apart from its high nutritional content which strengthens the body and gives it energy for various physical and mental activities, dragon fruit is also rich in some vitamins such as Vitamin C and small quantities of niacin which is an acid of Vitamin B complex.

This nutrients combined with other nutritious qualities help to keep the skin smooth and glowing.

They are also capable of reversing the effects of various skin diseases such as acne, blisters and so on. Also these nutrients boost production of platelets thereby aiding faster recovery from injuries.

Protein content in dragon fruit is of significant quantity and protein when broken down to its simplest forms is essential to the carrying out of various metabolic activities in the body such as digestion, repairing of damaged tissues, growth, cell recovery and so on.

With all these functions listed above it is certain that protein is very important not only to good health but ordinary day to day activities and its signuficance cannot be over emphasized.

Dragon fruit is rich in it and can therefore be made a regular part of meals.

The human eye is one of the most vulnerable organs in the entire body having to deal with threats both externally and internally.

You can be careful and keep the eyes away from sharp objects to stay safe from external threats while dragon fruit helps tackle the internal threats. The fruit contains beta-carotene, a substance that helps the body to remain healthy and grow while also preventing gradual loss of the main site of vision in the eyes often experienced in the aged, in simpler terms it prevents macular degeneration and glaucoma.

Dragon fruit is well equipped with some elements that are important to a successful pregnancy carriage and birth. It contains calcium which is very important in the formation and strengthening of bones of the foetus, vitamins to boost immune system of mother and protect the foetus and most importantly rich iron content.

Iron is very important in successful carriage because it is the element that is responsible for carrying of various nutrients and oxygen all over the body and that includes transmitting it from mother to child.

Some cases have been reported in which people suffered serious allergies to the fruit although they are very rare. The symptoms can be mild such as nausea and slight headache but in some cases they can be severe leading to blockage of nose or trouble breathing.

Nonetheless, the health benefits of dragon fruit far exceed its negatives and the percentage of allergies reported is insignificant compared to its overall advantage.

Taking too much dragon fruit can be harmful to health and could lead to digestive problems such as constipation. This is because the fruit is rich in fibre, an element that was mentioned earlier to be capable of bulking up stool. If consumed in excess the stool may become too bulky leading to inability to pass freely through the digestive tract and be excreted.

So it is therefore important to consume with caution to avoid negative consequences such as this.

?Are dragon fruits rich in calories?

In similarity to many other fruits dragon fruit has a very low calorie content compared to its size having only 0.3 calories per gram, and so an average sized dragon fruit of 198 grams has only 60 calories.

Low calories content also has its negative consequences but in the case of dragon fruit, that quality is a feature that makes it useful for purposes such as weight loss amongst other things. So although dragon fruit is low in calorie content, it has made up for it with other nutritious benefits.