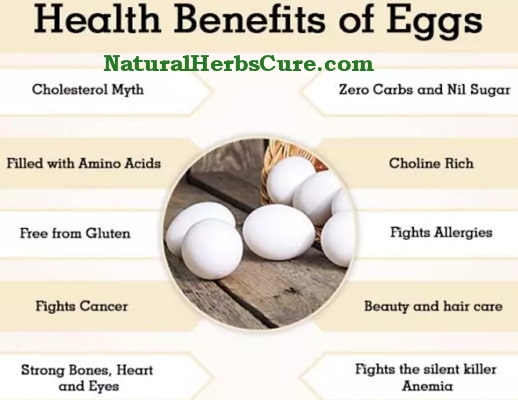 This article focuses on the health benefits of eating eggs and what you get when? you eat egg whites and yolks.

While eggs are packed with essential nutrients, they were once considered as a major contributing factor to the development heart disease. However, recent discoveries indicate that the inherent danger of eating eggs is seen when one consumes more than one egg each day.

That being said, an egg is made up of two major parts: the egg white, and the egg yolk. These two parts have distinct compositions as we shall get to know in this article. While the white part of the egg contains more of the protein, the yolk is source of an egg?s fat and cholesterol contents in addition to other nutrients.

What is egg white?

The white part of an egg comprises 90% water, while the remaining 10% is protein.

What is egg yolk?

The egg yolk is the main source of an egg?s fat and calories. It is the yellow spherical part of an egg and is surrounded by the egg white.

Egg white contains fewer protein and nutrients than a whole egg. To put into perspective, an average-sized whole egg contains 71 calories, 6 grams of proteins, 5 grams of fat, and 211 mg of cholesterol. In comparison, the white part of the same egg will contain 16 calories, 4 grams of protein, no fat, and no cholesterol. Other nutrients in the egg white include 6.6 mcg of selenium, 3.6 mg of magnesium, 4.9 mg of phosphorus, 53.8 mg of potassium, 2.4 mg of calcium, and 1.3 mcg of folate.

Since the egg white does not contain any fat or cholesterol, it therefore means that, the egg yolk is the source. Considering the same whole egg, the egg yolk should contain about 55 calories, 8 mg of sodium, 2.7 grams of protein, 4.5 grams of total fat, 210 mg of cholesterol, 9.5 mcg of selenium, 18.5 mg of potassium, 66.4 mg of phosphorus, and 1.6 mg of saturated fat.

Egg yolks are rich in antioxidants including zeaxanthin and lutein, which are essential for eye health. Another important compound found in egg yolks is choline; choline plays a role in the brain development of a fetus. In addition, choline has anti-inflammatory properties that can be beneficial in the treatment of various inflammatory conditions.

Following are some of the health benefits of eating only egg whites:

Eggs are one of the best sources of protein, with most of the protein content found in the white part. Egg whites have a low caloric content but are high in protein, making them a healthy choice for people on a weight-loss regime, who want proteins without adding calories.

Although eggs are high in dietary cholesterol and saturated fat, they (cholesterol and fat) are, however, found only in the egg yolk; the egg white contains no cholesterol or fat. While recent research have found that the cholesterol content of eggs pose no serious health risk, they can be harmful to some people. For such people, eating egg whites is a healthy way of maintaining their body cholesterol levels.

Eggs white contains potassium, which is an essential mineral for maintaining blood pressure levels. Healthy potassium and low sodium levels in the body help in preventing a spike in blood pressure, which is a precursor to some health conditions. Hypertensive persons who include egg white in their diet can reduce their high blood pressure and put it in check.

Pregnant women can benefit from consuming egg whites. A study has found that pregnant women who include egg whites in their diet have a higher chance of giving birth to babies with normal weight. The underlying reason is seen in the fact that egg white is high in protein and other essential nutrients.

Although not as much as in egg yolks, egg whites contain choline. Choline is a primary component of the nervous system and helps in protecting it from damage. Eating egg whites will help in protecting the body against disease.

Since egg white contains no cholesterol, it means that they are heart-friendly. High cholesterol levels in the body can increase the risk of heart diseases like arteriosclerosis. So for people who are predisposed to heart disease, it is advised that they cut down on their egg consumption, or better still, eat only the egg white.

The high protein content of egg whites is beneficial in building muscles. While the result of eating egg whites for muscle growth will not be instant, over time you will get them. Growing children can benefit from consuming egg whites as it provides them with the much-needed protein required for proper growth.

Obese and overweight individuals can benefit from including egg whites in the diet. Due to the fact that egg whites have little calories and are low in fat, adding them to their meal is actually a no-brainer. Moreover, egg whites also contain important nutrients required by the body. Apart from this, eating egg whites creates a feeling of satiety, which is helpful in curbing a voracious appetite.

Diabetes patients have a risk of developing cardiovascular problems. Since egg whites help to prevent heart problems, adding them to the meal of a diabetic will ensure that they are also protected.

Egg whites have a high concentration of calcium that is important for bone health. Bone diseases such as osteoporosis result from a deficiency in minerals like calcium. Thus, eating calcium-rich foods like egg whites is a healthy way of making up for this deficiency.

Below are some of the nutritional benefits of eating egg yolks:

According to a report, egg yolk contains amino acids such as tyrosine and tryptophan, which help in protecting the heart against diseases.

As previously stated, egg yolk contains lutein and zeaxanthin, which are beneficial to eye health. The risk of developing age-related eye problems like macular degeneration and cataract can be reduced by consuming egg yolks.

The presence of choline in egg yolks means that consuming the yolks will help in the treatment of inflammatory conditions like arthritis. The anti-inflammatory properties of choline also play a role in maintaining cardiovascular health.

Egg yolk also benefits the brain in some way. This is because choline forms a basis of a neurotransmitter, acetylcholine, which is a major component of the nervous system. And as already mentioned, choline helps in brain development of a fetus as well as in promoting long-term memory in children.

Egg yolks help in preventing the abnormal clotting of blood. This anticoagulant property is particularly useful for people who have a high risk of developing blood clots.

While the egg white is composed mostly of water and protein, the egg yolk contains most of an egg?s nutrients. Vitamins such as vitamins A, D, E, K, the B vitamins, and minerals like calcium, magnesium, potassium, selenium, and sodium are found in significant amounts in egg yolks.

Some children can be allergic to egg whites. This type of allergy is as a result of a person?s immune system wrongly recognizing some egg proteins as harmful. Signs and symptoms of egg allergies include swelling, itchy nose, nausea, watery eyes, etc. However, the good news is that most children often outgrow their egg allergies.

Biotin is a B vitamin that helps in body growth and energy production. Eating lots of raw egg whites can lead to a reduced absorption of this vitamin in the body. This happens because egg whites contain avidin, which is a protein that binds with biotin, thereby, preventing the vitamin?s absorption.

Consumption of raw egg whites can increase the risk of food poisoning due to Salmonella (bacteria). To reduce this risk, it is advised that you cook your eggs before eating.

The long-held notion that eating eggs is the main cause of heart disease is gradually being discarded, according to ongoing research.

While the focus of this article is to distinctly take a look at the health benefits of consuming egg whites and egg yolks, the greater advantage is in consuming a whole egg. And given the fact that eggs are good sources of essential nutrients, it only serves well to include them in your diet.

However, you need to ensure that you prepare your eggs properly and to stay within the recommended daily intake to prevent any side effects.

which is healthier egg yolk or egg white

why egg yolk is not good for you.

Too much Of it can increase risk of food poisoning.

which part of the egg has the most protein?

is it better to eat egg white or whole egg.

It is safer to eat the whole egg to prevent side effects.