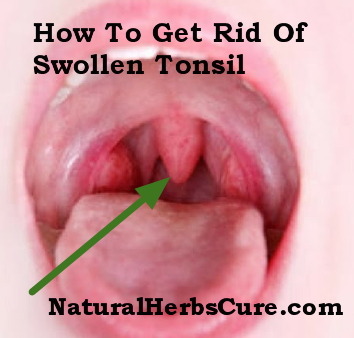 How To Get Rid Of Tonsillitis Fast Without Antibiotics

Swollen tonsils also known as tonsillitis is one of the most common oral infection with a higher probability of affecting children. Tonsils are known as the body’s first line of defense against harmful substances or microorganisms that are about to gain access into the body through the mouth, their appearance is in the form of two soft oval shaped lymph nodes that can be found at the extreme end of the throat.

The function of tonsils is to produce white blood cells which the body uses to fight off bacteria and other types of germs but sometimes they are weakened and infected by these harmful substances thus leading to inflammation and other painful effects.

Tonsillitis is most common among children than any other age group because it is easier for them to come in contact with an infected individual and are fond of putting unclean substances in their mouth.

It can be caused by bacterial infection or in a more severe case in which it is as a result of virus, nonetheless, proper diagnosis allows it to be treated and cured within a matter of days. Below are the types, causes, symptoms and home remedies that can be applied for effective treatment of swollen tonsils otherwise known as tonsillitis.

This is the most common cause of tonsillitis especially in kids. The primary function of the tonsils are to protect the body against these substances but when they are weakened or overpowered they give in and it leads to swollen tonsils.

These harmful bacteria can get into the mouth by consumption of already infected substances or coming in contact with an infected individual.

There are only few cases in which tonsillitis has been found to be as a result of virus, in some areas viral infection is totally ignored and antibiotics are often prescribed for the treatment of this disease. Nonetheless, research has proven that swollen tonsils are caused by viruses like that present in cold, sore throat and a host of others. Most popular mild viral infections often reverse themselves in a few days but some steps can be taken to reduce the effects of the symptoms of this infection and ease pain as the body recovers.

This is usually the first step taken to reduce the effects of the symptoms and it has proven to be very effective over time. It involves mixing a little bit of salt with warm water and gargling 3 to 4 times daily to kill the harmful bacteria or toxic substances in the mouth.

So if you find yourself in a situation in which you discovered that you have swollen tonsils the first thing you should do to ease yourself of this pain is a salt water gargle.

It is advised that people suffering from tonsillitis should suck on things that are cold such as yogurts and other dairy products as they would help ease pain in the mouth.

Another use is that most of this ingredients are probiotic in nature thereby providing the body including the mouth with healthy bacteria.

This helps to counteract the effects of those harmful bacteria and reverse symptoms such as inflammation and help reduce sores.

This famous perennial herb has a lot of uses ranging from treating digestive problems, destroying cancerous cells and so on. It is also useful in curing tonsillitis as it has high antiseptic qualities which make it a very old agent for killing harmful bacteria found in the mouth while also reducing inflammation, hence reducing pain.

Another advantage of turmeric is that while it does well in helping to get rid of toxic materials from the body it also has high nutritional value and thus provides the body with a lot of essential nutrients.

Lemon is a favorite when it comes to killing harmful bacteria that lead to infections in the mouth. This is because it has elements which give it a high antiseptic ability and still retain its enormous nutritional value.

Lemon can be administered to a person suffering from tonsillitis in various ways and still retain its potency. The first method involves rubbing pepper or oil directly on the surface of the lemon after slicing it and then sucking on it. The second method is a conventional one and the process starts with mixing the lemon juice with warm water and drinking it 1 to 2 times daily.

Both methods help to effectively clear the mouth of bacteria, reduce inflammation and ease pain thus reversing the effects of tonsillitis.

Ginger is a very good agent used in curing a lot of ailments and body disorders due to its ability to specifically target harmful bacteria and also reduce inflammation. This unique abilities multiply in efficiency when it is combined with honey and that is why ginger tea is one of the most common methods employed in treating tonsillitis.

To use these ingredients, the water is heated to a minute temperature and is then mixed with honey. The mixture should be taken in the morning everyday and it guarantees a faster and less painful recovery.

Coconut oil is another basic home ingredient that can be used to effectively treat tonsillitis. In similarity with the other ingredients listed before coconut oil has strong antiseptic and anti inflammatory properties making it very useful in getting rid of bacteria responsible for infection of the tonsils.

Another advantage of coconut oil is that it is easy to administer and can be used in a variety of ways while still retaining its strong effects. One can gargle on it or use it in form of a tea, nonetheless it remains effective and total recovery is guaranteed in a couple of days.

Cumin is a herb that is often used to spice meals at home but it can also be used to treat inflammation anywhere in the digestive tract and this includes the mouth.

Cumin helps reduce inflammation of the tonsils thus preventing a situation which would lead to growth of further bacteria.

To use cumin the seeds can be ground into powder and mixed with water to form an herbal mixture and one can sip on this mixture once or twice daily, preferable at the beginning and end of the day. Cumin has proven to be very effective over time and quick results are guaranteed.

Treating infections such as this is the main purpose of lozenges and the good news is that they are ingredients that are found in most houses.

This medicinal candy is often created to have high antibacterial and anti-inflammatory qualities and this makes them very useful in curing swollen tonsils. Also, its appealing nature makes it suitable to be used for kids who might have a problem using other methods due to pain from the symptoms of tonsillitis.

Lozenges are one of the best home remedies for treating oral infections such as tonsillitis amongst others.

In some cases, the infection and inflammation of the tonsils might have gotten to a chronic stage in which the home remedies listed above may not be able to deal with it. This stage is characterised by extremely painful swallowing and smelly mouth among other things and it would take medical expertise to deal with it, especially when it is reoccurring.

The use of antibiotics or surgery is sometimes prescribed to permanently get rid of the infection.

The use of antibiotics to treat swollen tonsil occurs when all primary methods such as salt water gargle, use of herbs and other ingredients have failed.

Although it does well to get rid of the infection it is not advised to immediately jump into use of antibiotics because not only do they destroy harmful bacteria but they also destroy the healthy and good ones, thus increasing the likely hood of the body getting infected at other times.

In cases where there is no other option apart from the use of these drugs to cure tonsillitis it is important to provide the body with essential nutrients and vitamins it needs to replace the ones lost over the use of antibiotics.

Vegetables, fruits and herbs are advised to be made a regular part of meals to strengthen the immune system by providing the body with good bacteria and nutrients who are as important as white blood cells in protecting the body against infections.

Tonsillectomy which is the partial or complete removal of the tonsils is referred to as the last resort when other methods including use of antibiotics have failed to stop the inflammation of the tonsils and in worse cases, the infections keep reoccurring.

This method is expensive and risky due to surgical accidents, and even in the case of a successful procedure, individuals who have had their tonsils removed are more prone to infections in the future.

It is important to make sure that all other methods have been exhausted before considering having the tonsils removed as this is irreversible.

Can I cure tonsillitis in 4 hours??

While it is impossible to completely get rid of tonsillitis is a couple of hours some methods have been used over time to reduce the effects and pain of the symptoms hence having an itch free recovery.

A favorite in achieving quick results is the use of cumin seeds, these seeds can be ground to powder and mixed with warm water to make a tea. The main function is for it to reduce inflammation while killing harmful bacteria and so the pain associated with swollen tonsils is gotten rid of.

Can I get rid of tonsillitis permanently?

In cases where the infection keeps reoccurring and is starting to pose a threat to the health of the victim, tonsillectomy which is the surgical removal of the tonsils is the next alternative in order to prevent further damage.