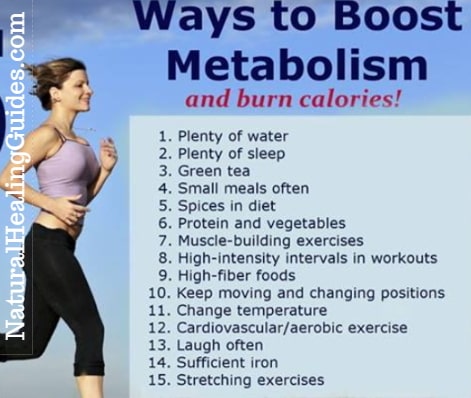 ?Metabolism refers to the total chemical processes by which plants and animals uses food, water etc. to grow, heal, produce energy, keep the body alive and functioning. Metabolism involves the sum total of both Anabolic(building up or synthesis) and Catabolic (breaking down) reactions within the body for the production of energy through the burning of calories and it is proportional to the weight of an individual with slim individuals having an increased metabolism while fat or obese people are faced with a slow rate of metabolism. The human body has a Basal Metabolic Rate(BMR) that can be described as the number of calories your body burns in order to produce energy mostly in the formation of Adenosine Triphosphate(ATP) a high energy phosphate compound to stay alive and ensure the body is working properly even at rest. Therefore even at rest the body is constantly working and therefore to achieve its maximum energy output the metabolic rate should be boosted.

There are however a few methods by which the metabolism of an individual can be increased to produce a fit body that is not easily prone to obesity and also makes sure that the body functions properly.

Whenever the idea of keeping fit and healthy crops into our mind one of the major way we can think of achieving that is by engaging in daily exercises. Exercises which includes but not limited to walking, jogging, running, heavy lifting, working on the treadmill greatly helps in boosting and increasing our metabolism or metabolic rate by aiding in the burning of excess fat in the system to produce energy needed for the proper functioning of the body.

It has been observed that obesity can be traced to the lack of exercises as the fat that should have been burned or degraded gradually accumulates within the body, this reduces the body metabolic rate and also greatly increases the risk of cancer and many heart-related sickness that includes Hypertension, Cardiac arrest . Therefore, exercising regularly keeps you fit, boosts your metabolism, prevents obesity and also reduces the risk of suffering from Cancerous growths or Cardiac diseases.

Some researchers have proposed that clean and pure water should be taken very early in the morning immediately after waking up, this helps bowel movements and boosts the metabolic functions of the body because while sleeping the body greatly reduces its metabolic rate and to compensate for it water has to be taken after waking up.

Water also helps the digestion of some substances within the body as most substances are digested with the aid of hydrolysis(use of water to break down substances) and when they are broken into their substituents(Catabolism) there is a release of energy that is employed in other Anabolic reactions.

The easiest method of burning calories to produce energy and make the body more active. Some individuals do not observe this easy method because they sleep on their bed at night and sits down during the day working with little or less time spent standing.

Research has shown that standing greatly increases the metabolic rate of the body and speeds up digestion also.

The habit of a good night sleep should be cultivated on a regularly basis as sleeping well during the night also helps to boost the metabolism. Just like standing it is another easy method of boosting the metabolic rate of the body.

Some people prefers cooking without the addition of spices especially pepper or chili but it has been shown that pepper contains Capsaicin that boosts metabolism quickly, so apart from its role in providing taste to the food, some spices also helps to indirectly boost our metabolism

Coffee contains caffeine that has shown to also affect the metabolic rate of individuals by increasing it slightly but it should be consumed moderately as caffeine also has its own adverse effects. Green tea can also be consumed in the absence of coffee as it has also same effect.

We are always in the habit of skipping breakfasts especially when running late to our places of work and instead resorting to grabbing a snack or consuming junk foods.This habit should entirely thrown out the window, ensure you consume a nice and balanced diet as breakfast by waking up on time as studies shows that breakfasts consumed in the morning just like drinking water early after sleep plays a major role in regulating the metabolism of the body for that day.

Breakfast taken in the morning also ensures that junks are not consumed thereby helping in the regulation of weight or weight management and it also plays a role in thermogenesis by the body.

The continuous consumption of alcohol and alcoholic beverages have an adverse on the body by decreasing the body basal metabolic rate and thereby slowing down the metabolism.

In a bid to boost the metabolism of the body alcohol consumption should be kept at a minimum or should be even be avoided if possible. Most times we consume this beverage for the fun of it or when trying to please our peers not thinking about its adverse effects, alcohol also acts on the cardiovascular system and could lead to the presence of Cardiac-related diseases or sicknesses and therefore should be avoided totally.

Proteins are classified as a type of food concerned with the repair of the worn out tissues of the body and it also help to increase the metabolic rate of the body. Food substances which contains Proteins includes but not limited to eggs(especially its yolk), full-fat milk and beans, these food substances can be consumed with other classes of food to complete the balanced diet but care should be taken that protein is not avoided in order to ensure that the metabolism of the body is boosted.

It has been said that an apple a day keeps the doctor away. This statement is very much correct and also comes to play when trying to increase the basal metabolic rate of an individual.

We generally believe in the notion that to keep fit and appear slim depends upon starving ourselves and depriving our body of food.

Research has shown that starvation has an effect on the metabolism of the body as it decreases its metabolic rate. The body when starved will attempt to minimize its available calories and will therefore decrease its metabolic rate drastically, this defeats the purpose of boosting the metabolism of the body. Therefore another easy way to boosting your metabolism depends on the consumption of adequate food in a balanced ratio when hungry

Caution should be applied when taking in supplements as it can over work the body at an alarming rate but other than that supplements like taurine, ephedrine have generally a thermogenesis effect on the body that is they increase the body heat and this in turn increases the metabolic rate of the body. Thermogenesis effect can easily be described as the effect of cooking with heat or fire, the food gets prepared faster when enough heat is applied, therefore increase in the thermogenesis of the body also drives the metabolism up.

Another method by which we can effectively increase our metabolic activities is by the consumption of organic products.

We depend mostly on processed foods and ignore the many benefits associated with our organic foods, the dependence on organic foods for our daily consumption can bring about an immediate impact on increase in our metabolic reactions and help produce ample energy to drive the body functions and also keep the body fit and healthy.

Foodstuffs rich in Iron also play an important role in revving up our metabolism as iron is essential for the proper functioning of some metabolic reactions within the body. It on is also indirectly involved in the transportation of oxygen in the human body through the blood and therefore when iron content in the body is increased it also leads to an increase in the transportation of oxygen and an increase in oxygen dependent reactions within the body.

Staying in a cool environment helps in the production of brown fat that aids to conserve temperature and this also aids to increase the metabolic rate of the body in order to produce heat by the burning of calories within the body.

The heat produced is responsible for balancing the body temperature, therefore another easy way of boosting our metabolism also depends on the temperature.

When the body is stressed there is a reduction in the metabolism of the body and also a reduction in the burning of calories and therefore in a bid to defeat this we should endeavor to be stress free or try and reduce the level of stress we encounter as our body system do not take well to a stressful condition as stress increases the synthesis of the steroidal hormone Cortisol that has been known to have a very adverse effect on the metabolism of the human body and promotes the risk of obesity.

There is a popular misconception just like starving will reduce weight we also think that a stressful lifestyle can also reduce weight but this is not the case as shown above.

The popular way to curb a stressful life is by laughing at all times, laughter they say is the best medicine and this seems true in this case as laughing sometimes takes our mind of some stressful situations and cause us to cherish what makes us happy thereby defeating the situation of a stressful lifestyle.

This might seem funny but nibbling on chocolates also helps with the boosting of our metabolism as it contains some amounts of flavonoids that is known to alleviate stress and also aids with the reduction in stress levels of the entire body system.

I kept this for later because it might seem impossible in our country that is generally faced with the situation of poverty and an inability to avoid the three square meal. But research generally shows that consuming three square meals with full foods helps in revving up our metabolism and if possible there should be an addition of snacks and fruits in between to ensure that there is an increase in the metabolism of the individual.

All these aforementioned methods are known to aid in the boosting of our metabolic rate or the metabolism of a person regardless of either age, gender, body size and sex. Individuals have different basal metabolic rate but still yet when the above mentioned methods are applied it can directly lead to an increase in the BMR or the metabolism of the individual.