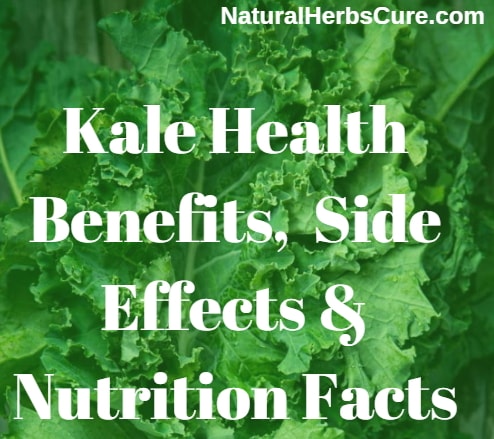 There is only a small group of foods that can be termed ?superfoods.? Kale, a leafy vegetable, belongs to this elite class. This vegetable plant is loaded with antioxidants, minerals, and vitamins essential for maintaining good health.

In this article, we shall be considering some of the nutritional benefits of consuming kale, and if any, some common side effects too. But, before we go into that, let?s get to know a little about this wonderful vegetable.

Kale belongs to the Cruciferae family of leafy vegetables that also includes broccoli, cabbage, Brussels sprouts, and cauliflower. Like its other cruciferous siblings, kale is a highly nutritious plant due to the many essential vitamins and minerals found in it. However, kale is quite different from the others due to its curly and coarse leaves that do not form a head.

Various scientific reports have even confirmed that kale is one of the most nutrient-packed foods available. It is no wonder that this vegetable plant has been given different aliases such as ?the new beef,? or a personal favorite ?the queen of greens.?

Kale is loaded with so many nutrients that make it classified as a superfood. A 67 gram serving of raw kale is said to contain about 80 mg of vitamin C, 0.2 mg of vitamin B6 (pyridoxine), 90 mg of calcium, 23 mg of magnesium, 0.547 mg of vitamin K; other vitamins and minerals in kale are vitamin A, trace amounts of manganese, copper, iron, thiamin, niacin, riboflavin, and phosphorus.

The superfood status of kale is not without any good backing. This vegetable plant offers a lot of benefits that may not be obtained from other foods. The following are some of the numerous health benefits of consuming kale.

Kale is rich in potent antioxidants and nutrients like beta-carotene, polyphenols, and flavonoids which are beneficial to general health. Antioxidants help to fight against the effects of free radicals in the body. These free radicals cause oxidative damage in the body that can lead to health problems like cancer.

By lowering the bad cholesterol levels in the body, consuming kale also helps to keep the heart in good shape by protecting from cardiovascular diseases. Moreover, the high vitamin K level in kale helps in preventing atherosclerosis.

Symptoms of depression can be reduced by eating kale. This is because kale has omega-3 fatty acids that help in treating depression.

Type 2 diabetes is caused by several factors including a deficiency in minerals like magnesium, which is found in kale. This deficiency leads to an increase in fasting blood glucose levels that is the major cause of diabetes. Besides, kale is considered as a low-glycemic-index food ? foods with low sugar content ? and helps in lowering the blood sugar level. Thus, by eating high fiber foods, diabetics can effectively control their fasting blood sugar levels while non-diabetics can lower the risk of the disease.

Kale contains fiber and water which helps to create a filling effect after eating. Eating a bowlful of kale will make you feel satisfied and feel less hungry without adding extra weight due to its low calorie content. Moreover, kale is classified as a low-energy-density food, which are believed to aid weight loss. Thus, overweight and obese persons who want to shed off the extra weight can benefit greatly from consuming kale.

Kale contains B vitamins including folates which are essential for the development of fetus. A deficiency in folates during pregnancy can lead to several problems like malformation of the baby?s brain. Pregnant women are advised to add kales in their daily diet so as to promote the proper development of the fetus (the unborn child).

Thanks to the isthiocyanates found in kale, eating this leafy vegetable can help to cleanse the body of toxins. These ishtiocyanates are also beneficial in the destruction of carcinogenic compounds in the body and help to protect the body from the effects of free radicals. In addition, kale has diuretic properties that increase the rate urination. Urinating is one of the ways that the body gets rid of waste products (toxins).

Kale contains high amounts of beta-carotene, which is a chemical compound that can be converted into vitamin A. High vitamin A levels are important for good eyesight. Apart from this, kale also contains other antioxidants such as zeaxanthin and lutein which have been linked with a lowered risk of age-related eye problems. Thus, eating kale in any form will help to keep the eyes free from eye problems.

Inflammatory diseases like arthritis and ulcers can be treated by eating more kale. Kale?s anti-inflammatory properties are due to the presence of omega-3 fatty acids and other beneficial antioxidants.

The presence of vitamins A and C in kale help to strengthen the body?s immune system. Kale is rich in vitamin C (more than that in spinach and as much as that in orange) which is a powerful antioxidant that is important for staving off diseases like common cold and skin diseases.

Besides the immunity-boosting properties of vitamin C, it is also beneficial to skin health. Skin problems like sunburn or dry skin can be prevented by eating vitamin C-rich foods like kale. It has already been stated that kale contains as much vitamin C content as orange; hence, eating enough kale can do wonders to the skin.

Kale is rich in dietary fiber which is needed for proper digestion. Digestion problems such as constipation and bloating can be prevented by eating a handful of kale. The fiber content in kale is enough to promote proper bowel movement.

Kale contains about 90 mg of calcium, which is about 9% of the required daily value. Calcium is essential for strong bones and a deficiency of this mineral has been linked with bone diseases like osteoporosis. Furthermore, the high vitamin K content in kale helps to increase the absorption of calcium in the bones. According to a report, a cupful of cooked kale has been shown to contain as much calcium as a cup of cow milk.

Commons side effects of eating kale

Eating kale is highly nutritious to the body, but when you eat more than is required by your body there are risks and possible side effects. Some of the common side effects of overeating kale are:

While kale increases the frequency of urinating, overconsumption of this vegetable can cause dehydration. This is because as a diuretic, kale promotes the release of water and too much of it can lead to loss of water from the body.

It has been found that some persons can develop allergic reactions to kale. While kale contains several nutrients that benefit the body, the risk of allergies to certain individuals should be considered.

Excess consumption of low-glycemic-index foods can result in a condition of low blood sugar level or hypoglycemia while overeating foods that can lower the blood pressure may lead to hypotension. Kale fits into these two categories (low sugar and low cholesterol) and, hence, eating too much kale is not recommended.

Though foods rich in fiber are beneficial for digestive health as fiber is essential for proper digestion, an excess consumption of these foods increase the risk of developing other digestion problems like indigestion. Moreover, eating too much fiber foods without taking an adequate amount of water can increase the risk of constipation and dehydration.

Kale is a member of the Cruciferae vegetable family that also includes broccoli. This leafy vegetable has been shown to contain numerous important vitamins and minerals that make it nutritious. Kale can be consumed in different forms such as using it for salads, chips, smoothies, or in soups; however, eating raw kale or steamed kale offers the best results.