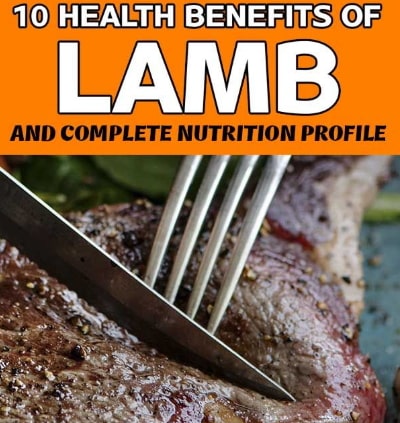 Lamb meat is the most consumed type of red meat over the world due to its tenderness, high nutritional value and amazing taste. This type of meat is specifically gotten from sheep, under the age of one year, and is consumed unprocessed, either boiled or roasted.

Lamb meat is a favorite among many people and has several health benefits. Although it is the most expensive of its varieties which are mutton which is meat gotten from lamb older than a year or a goat. It’s nutritional value and amazing taste complement for this. This article gives an insight into the various health BENEFITS and nutritional value of Lamb meat.

Protein is one of the essential components that are needed by the body system for optimal functioning. However, the way the body processes it and its effectiveness on performing several functions depends on the type and protein comes in varieties when it is broken down to its basic form which is an amino acid. The sources of this variety of protein differ, some in plant foods and others from sources such as milk amongst others. Lamb meat, however, is a source of the ‘complete protein’ as it contains all the essential varieties of the important nutrient for the functioning of the body system. Apart, from its health benefits protein is also effective in helping to aid weight loss, the building of lean body mass and repairing of damaged tissue.

An average human consumes different types of fat, most of it being the unhealthy type that contributes to health problems but Omega-3 fatty acid is one of those healthy types. This type of fat which is found in fatty fish’s contributes several health benefits to the body system, which range from improving heart health, regulating blood pressure and increasing quantity of healthy cholesterol in the body system amongst other things. Lamb meat is also a rich source of the nutrient, providing it in large quantities for the body system. Omega-3 fatty acid is one of the few completely healthy types of fat and having a rich source if it such as lamb meat is very good for the body system.

Glutathione is one of the best and most potent antioxidant elements in the body system. This substance has abilities to combat the fiercest of radicals in the body system, thus ensuring protection and optimal functioning of the body system. Although, it is naturally produced by the body through amino acids; glutamate, glycine and cysteine, other healthy external sources offer several health advantages and that includes Lamb meat. Lamb meat is rich in this antioxidant element thus making the development of the immune system one of its exceptional abilities.

Getting various essential nutrients into the body system might be tough work. It involves consuming several types of foods and may even require the use of supplements to provide the body with these nutrients. Lamb meat, being dense in nutrients, in the sense that it has high nutrient composition per size is one of its amazing benefits. A gram of red meat contains several calories and quantity of the most important nutrients and vitamins which range from healthy fat to protein and many others. So, if you are on the search for a quick, nutritious bite, Lamb meat has that benefit to offer.

Lamb meat is rich in creatine, a nutrient that helps boost strength and performance thus making this food type a favorite among many athletes and bodybuilders. Creatine is found found in muscles cells. It acts as an energy store helping the body provide more energy when it is needed, in cases like heavy lifting or other rigorous activities, while also aiding the building of muscle mass. Creatine offers several health benefits, and lamb meat helps boost the production of this nutrient in the body system.

Is Lamb Meat healthy for bodybuilding?

Lamb meat is a favorite among many bodybuilders because of the several health benefits it offers and it promotes the building of body mass, particularly its lean nature. Lamb meat does this through it several components which are its richness in protein, creatine and many others.

Is Lamb Meat good for weight-loss?

Lamb meat is one if the healthiest varieties of meat particularly when it is taken fresh, in the absense of preservatives or it being processed. It contains several elements such as protein, healthy Omega 3 fatty acids and others which help aid weight loss by boosting metabolism and contributing to the development of healthy lean muscle mass. Lamb meat, unlike its other counterparts, does not contain a large quantity of unhealthy cholesterol or Omega-6 fats which contribute to unhealthy weight gain. So, if you’re looking to build a healthy lean muscle mass or lose weight naturally, Lamb Meat is a very good choice for you.

Is Lamb Meat healthier than chicken?

Although this two varieties of the meat have similar components and health benefits, they also differ in several areas. Their effect on the body system is not the same, and we have decided to compile a detailed analysis of the comparison between lamb meat and chicken, and which is healthier for you.

Both lamb meat and chicken are rich in all the several varieties of protein, making them a good choice to include among meals for nutrition and optimal performance. However, the degree of density varies chicken being richer in protein than lamb meat when measured per gram.

Lamb meat and chicken are rich in some minerals that are essential to the optimal functioning of the body system. This includes potassium, calcium and several others. The only notable difference between them would be that lamb meat has a higher zinc content than chicken thus giving it a high hand in mineral content.

The major difference between lamb meat and chicken meat lies in the value of fat found in each of them. Lamb meat is naturally rich in more fat than chicken, but this also comes with a downside as a great percentage of that fat, is Saturated fat. This is unhealthy as it could lead to several heart problems and other health conditions.

Is Lamb meat high in cholesterol?

Lamb is rich in a number of nutrients, and that also includes Mono-saturated and Saturated fats. The monosaturated fat has been researched to be capable of lowering cholesterol in the body, while the former is more likely to boost it, thereby making its excess dangerous to the body system. Lamb meat, however, offers more of the monosaturated fat as long as it is prepared adequately and the lean parts are consumed cautiously. This meat should not be consumed fried by someone hoping to lose weight as this only increases the fat content. Ultimately, Lamb Meat does not pose a problem to the body system in the form of cholesterol content as long as it is consumed with caution.

What is red meat? Red meat is any meat that high content of hemoglobin, a protein that which when reacts with oxygen it turns red and gives the meat its colour. Lamb meat is rich in hemoglobin and so can be regarded as red meat. However, red meats have been a subject of criticism over the years with many research coming out to state that this types of meat greatly contribute to the quantity of unhealthy cholesterol in the body system. Lamb meat on the other hand, despite being regarded it has a low quantity of Saturated fat, thus ‘lean meat’.