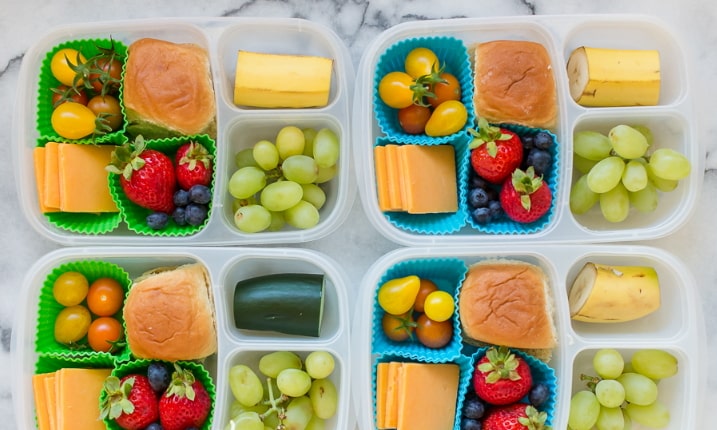 Gluten is the name of a kind of protein found in grains like rye, wheat and barley. It is used in making various types of cereals, pasta, bread, sweet & savory pastries, snacks. Some beverages also contain gluten components from wheat and barley. Foods which contain gluten are considered unhealthy by some. As gluten does not particularly contain nutrients of great importance to the body and can cause intestinal problems for some.

Some individuals avoid gluten due to medical conditions like celiac which makes them sensitive to foods containing gluten while others just generally want to live as healthy a life as possible and take good care of their bodies. Those who suffer from celiac disease are to avoid gluten in any form as it could prove life threatening if not handled with care.

However the case may be the awareness of maintaining a gluten free diet or at the very least a reduced gluten diet has become rather popular even amongst those who are not gluten intolerant. Many people who eliminate gluten from their diet have claimed to have experienced positive body changes.

The number one reason why gluten should be avoided is for health issues like celiac. If a person develops a condition known as celiac disease or experiences frequent discomfort in the abdomen mostly after consuming substances which contain this protein called gluten. Then such a person should avoid the in-take of gluten products.

Celiac disease is a medical condition which results when a person?s system has trouble with the presence of gluten. The presence of this protein could severely harm the small intestine as the immune system of some individuals recognizes gluten as a threat.

The body of such people subsequently mounts a resistance against gluten and the immune system accidentally damages parts of the small intestine over time. When this condition is ignored, with time it could eventually lead to severe damage of other organs in the body.

For some, this disease could just show up while for others it could have been inherited. But whatever the case may be the medical remedy for celiac disorder is to completely avoid foods and substances which contain gluten. This medical issue has no cure and people will often have to make life adjustments should such ailments show up. It is often a life time issue.

People who have celiac disorder often experience bloated and gassy feelings, they could develop skin conditions, experience pain in the abdomen, frequent feeling of fatigue, abdominal instability & discomfort. This usually occurs after the consumption of gluten products. The ailment can only be medically diagnosed so it is advisable to have medical test carried out if you notice such symptoms.

A few other people who do not suffer from this medical disorder still avoid gluten consumption probably due to allergic reactions or a general intolerance for gluten. This intolerance could also make them develop mild feelings of abdominal discomfort after the consumptions of foods containing this protein. Some other people simply believe a gluten free diet connotes healthy living.

Gluten can be found in several kinds of grains like wheat, rye and barley. Barley can be used in the production of certain kinds of cereals and malted drinks, snacks and even beers. A kind of flour can also be gotten from this grain. It is sometimes present in food colorings and certain medications or supplements. On packaged goods, a sure way to find out if an item has contents of barley is to look in the ingredient box for words like barley, malt and maltose.

Rye is a type of grain which can be a component of some alcoholic drinks like beer, vodka, whisky. Rye can be added to cereals and it is also used in the production of flour. The flour gotten from rye is the kind which can be used in baking as well.

In the present society we find ourselves it would seem like the goal of most people male and female is to improve their out ward appearance. People go to just about any length naturally and artificially in order to get the perfect body. Overweight and obese people want to lose weight and slim people want to stay that way.

It is common knowledge that the most natural and efficient way to lose weight is through a combination of the right diet and exercise. People go on various kinds of diets with the aim of losing weight or controlling weight gain. One of these diets people try is a gluten free diet.

Eliminating gluten from your diet is not a guarantee for weight loss as gluten itself is not exactly responsible for weight gain. However those who cut gluten out of their diet tend to lose some weight not because of the lack of gluten; but because the grains which have gluten in them are used in the making of unhealthy meals and snacks which grossly promotes weight gain. Not consuming these foods means a drop in calorie in-take which could result in weight loss.

These foods are often referred to as processed foods and junk foods. A person gains weight when he/she constantly eats way above the required amount of calories the body needs per time. Things like bread, cakes, pasta, cookies and many comfort foods have flour as a major component. Flour is gotten from grains like barley, rye and wheat which all have gluten in them.

By staying clear of these unhealthy foods a person may be forced to rely more on healthy snacks and food stuff which are more nutritious for the body and contain less calories.

But gluten free food does not guarantee weight loss because you could consume other foods which are free of gluten but very rich in calories. And calories are what you should look out for when making a diet plan for weight loss. Avoiding foods containing gluten does not necessarily mean you are eating healthy.

List Of Gluten Free Foods And Snacks For Children And Adults

Staying clear of gluten in Nigeria may require you making some of your own pastry snacks, if you have a craving for them. For instance baking a gluten free cake or making gluten free cuisine requires you switch all-purpose flour and wheat flour for gluten-free flour. Gluten free flour is flour made out of plants which have no gluten in them.

Some of these gluten free flours include coconut flour, sorghum flour, rice flour and potato flour. These types of flours may not give you the same results in taste as the regular gluten flours but you basically get similar results. You can still enjoy your homemade pastries even when non-gluten flour is used to prepare them. You can also still enjoy gluten free bread, muffins, cookies, cakes etc.

Gluten is usually found in certain grains not all grains. Rice and millet can be consumed as they are free of gluten.

Foods like potato, yam, corn, beans, soya beans and many other Nigerian foods can still be eaten.

Palm oil, soya oil and the likes are also gluten free and can be taken in. Foods eaten in Nigeria like semolina and wheat should be avoided as they contain gluten.

Meat in general beef, chicken, turkey and the likes can be eaten. Also eggs, fish and sea foods can be consumed as they are free of gluten. Soups like egusi, ogbono, okro, bitter leaf and general Nigerian soups that are not tied to gluten grains can be eaten.

Fruits and vegetables are basically free of gluten and can therefore be freely consumed. For healthy snack options you can choose to munch on fruits apples, carrots, guavas, berries, bananas cucumbers, avocado and more are healthy and gluten free. Nuts are also free for consumption.

With regards to some packaged food and snacks, it is best to either avoid it in general or diligently check the ingredients listed on the wrap to be sure they are free of gluten. A few products specify the absence of gluten.

Gluten is not necessarily bad for you except of course you suffer from gluten related health issues or your body is sensitive to its presence. If you fall into such categories, then you are better off staying away from it completely.

Here is a useful chart from Glutenfree.com. 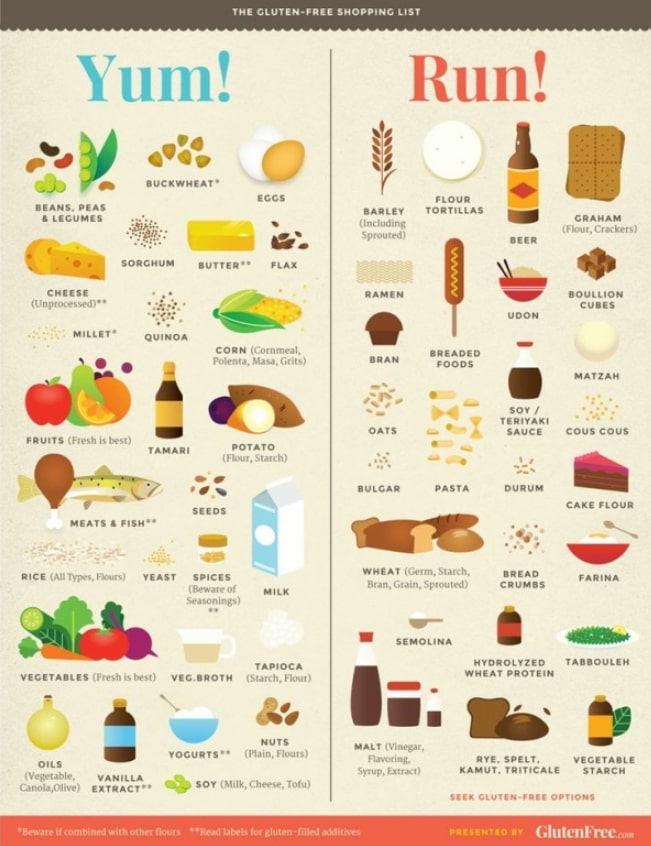