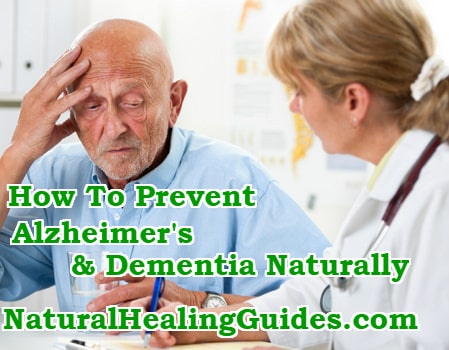 While there are many treatment methods for the disease, this article will focus on some natural home remedies of controlling the disorder.

What is Alzheimer?s disease?

Alzheimer?s disease, or simply Alzheimer?s, is a neurological disease that affects the brain and is characterized by impairment in memory subsequently followed by an impairment of thought and speech, ultimately culminating in a state of utter helplessness.

Dementia, on the other hand, is a group of brain disorders that are marked by a mental deterioration of the brain. Alzheimer?s disease is a form of dementia and thus, affects the way the brain functions, and the way a person behaves.

While the root cause of Alzheimer?s disease is not yet known, the process of neurological breakdown starts by a wasting away of parts of the brain.

Based on studies conducted on Alzheimer?s sufferers, it has been discovered that the presence of abnormal protein clumps called amyloid plaques and groups of protein fibers called tau tangles in the brain may be related to the process.

These protein groups interfere with the normal neuron activity in the brain and over time cause the death of the affected neurons. The damage continues in a gradual process that spreads to other parts of the brain including the hippocampus.

That being said, there are factors that contribute to the risk of developing Alzheimer?s as will be outlined below.

This is definitely the most prominent factor that contributes to an increased risk of Alzheimer?s disease development. According to research, the risk of developing Alzheimer?s disease increases by 200% every five years after a person clocks 65 years. Having said that, it may not be uncommon to find younger people suffering from the disease; in this case, it is referred to as younger onset dementia.

Family history also plays a part in the development of Alzheimer?s disease. A person with a family which has a history of the condition affecting members has a higher risk of getting the disease than someone without a family history. In such cases, the symptoms of the disease tend to be visible from a relatively younger age, like around 35 years upwards.

Like family history, people who have had life-threatening head injuries, such as a whiplash, have an increased risk of developing Alzheimer?s disease.

Lifestyle factors such as dieting, smoking, and lack of physical activities have also been shown to increase the risk of developing Alzheimer?s disease. Thus, it is advised that such behaviors as unhealthy dieting and bad habits like smoking and living a sedentary lifestyle should be avoided.

The signs of Alzheimer?s disease may not be very different from other similar conditions. Moreover, the early stage of the disease may not come with noticeable symptoms. The symptoms of the disease are classified based on the stage of the condition. There are basically three stages of Alzheimer?s disease: mild, moderate, and severe.

This is the first stage of the condition and is marked by deterioration in the memory of the person. Mild Alzheimer?s primarily affects the part of the brain responsible for memory and speech and is characterized by symptoms such as:

This is the last and most advanced stage of Alzheimer?s disease. All symptoms of the previous stages become more intense at this stage. Hallucinations and delusions become more frequent, confusion gets worse that the person cannot tell the difference between reality and imagination. It is not unusual for the person to get disorientated at this point. At this stage, the sufferer should be given full care and attention.

Other symptoms at this stage are:

Coconut oil is rich in ketones and other brain-nourishing compounds. Ketones have been found to have brain-boosting capabilities while the healthy fats in coconut oil help in strengthening the nerves connecting the brain. So taking two tablespoons of this oil three times daily can help to keep the symptoms of dementia at bay.

Yoga poses and daily meditation helps to keep the memory functioning properly. Apart from this, meditation also helps to de-stress the body. The impact of stress on the body has far-reaching consequences including promoting the deterioration of the brain.

Lifestyle habits like smoking tobacco have been linked with an increased risk of Alzheimer?s disease. Smoking negatively affects the body in several ways such as promoting the onset of cardiovascular diseases and suppressing blood flow to the brain. By quitting smoking, the brain gets a good supply of oxygenated blood with essential nutrients.

Sea foods like wild-caught salmon are considered as rich sources of omega-3 fatty acids, which are a healthy type of fat. These healthy fats have been linked with anti-dementia properties.

This is an herb used in traditional Chinese medicine. Gingko biloba is helpful in the treatment of Alzheimer?s disease due to its high antioxidant content.

This is a family of trees, herbs, and shrubs that have memory-boosting properties. Thus, this group of herbs can benefit Alzheimer?s patients.

This is a Chinese herb that has brain-protecting properties. The use of huperzine for medicinal purposes dates many centuries and can be helpful in the treatment of Alzheimer?s disease and dementia.

Alcohol contains many chemical substances that may be harmful to the brain. According to research studies, there is a type of dementia called alcohol-related dementia. Reducing your alcohol intake or staying away completely from alcohol can help to prevent Alzheimer?s disease.

Drip two drops of frankincense oil on the roof mouth and massaging the scalp with rosemary oil can help to prevent neurological damage.

Acupuncture is a treatment method that involves the use of sterile needles to stimulate body functioning. This therapeutic method may also help to improve cognitive function in Alzheimer?s disease patients, according to some research studies. Further, a separate study found that acupuncture can help to alleviate pain and improve the mood.

According to a nutritionist, people who brush their teeth two times a day have a lower risk of developing brain disorders like Alzheimer?s disease than those who brush less than once. According to a study, the underlying reason is due to the fact that disease-causing bacteria in the gums can lead to a deterioration of the brain function.

The way we sleep can also play a part in the development of neurological disorders like Alzheimer?s disease. To reduce the risk of such disorders, it is advised that you sleep on your side.

According to a study conducted in 2006, adults (with age-related memory degradation) who took a 125 mg dose of Brahmi two times daily for a three-month period were found to experience some improvements in memory.

Alzheimer?s disease is a ?silent life stealer.? And while more research is still ongoing to find a true cure for the condition, understanding how the disease starts and the common symptoms will help to take effective measures in managing the situation.

The remedies outlined in this article are meant to serve as a guide to help in the treatment of dementia of Alzheimer?s type. Professional medical advice should not be neglected and supersedes any other advice.