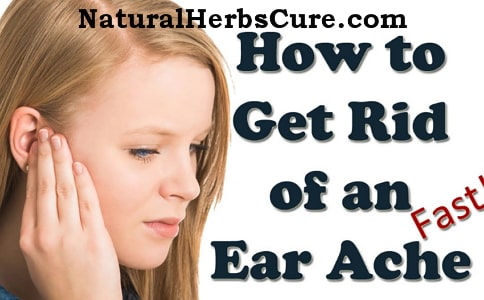 Many people consider earaches as just minor health problems; the fact, however, is that a ?minor? earache can lead to several ?major? problems, including hearing loss, if left untreated.

Earaches are caused by several factors, getting to know and understand the underlying cause of the condition will help in administering the appropriate remedy.

This post will focus on home remedies for earaches, applicable to both adults and children.

Earache, or otalgia, is a dull persistent painful feeling in and/or around the ear. The aching can affect either or both ears, and may be recurrent. Although children are more affected by earache, the condition can also occur in adults.

As already mentioned, earache can be caused due to various reasons. Top on the list of common causes of this type of ache is an infection in the ear like otitis. Other common causes are:

Other causes such as a perforated eardrum, trigeminal neuralgia, teeth braces, tooth infection, skin conditions like eczema in the ear canal, etc.

Home remedies for earache: How to treat earaches at home

The following are some home remedies for earaches:

Heat or warm compresses are one the most common natural home remedies for earaches. Warm compresses help by promoting blood circulation around the affected region. You can make a hot compress by soaking a washcloth in warm-to-moderately-hot water, or by heating the cloth in a microwave. Alternatively, applying a hot pad to the affected ear for about 20 minutes will help to relieve pain.

Tea tree oil is an effective home remedy in the treatment of several inflammatory conditions. Mixing a few drops of tea tree oil in a carrier oil like olive oil or coconut oil, pouring the mixture into the affected ear, and tilting the head for one minute with the affected ear facing up, may help in reducing pain.

The juice of the leaves of the basil plant can also be used for treating earaches, according to doctor in Ayurvedic medicine. Get some fresh basil leaves and crush to get the juice. Strain the juice and mix with some coconut oil, then, apply to the affected ear.

This is another simple home remedy for earache. For this method, cover a cotton bud with warm salt and place the bud in the affected ear for about 10 minutes. Doing this helps to reduce the swelling and pain in the ear. This is effective because salt is deliquescent ? tends to absorb moisture in the air ? and draws out fluid from the ear.

Symptoms of earache like ear pain can be soothed using acupressure. Acupressure is a method of treatment that involves the application of pressure by finger to certain pressure points in the body so as to reduce symptoms of a condition. While adults may not have any problem with acupressure, children on the other hand, can be frightened about someone touching their already painful ear. However, there are known pressure points like the top of the head or the feet that can be used.

Onions have antimicrobial and analgesic properties that come in handy when treating earaches. Heat an onion bulb for about 2 minutes and strain for the liquid. Allow the liquid to cool and apply to the ear. Make sure that the person being administered to is lying down.

Dribbling a few breast milk drops in the ear and leaving for about 5 minutes can help to alleviate the symptoms of earache. This is because breast milk is rich in beneficial compounds that help in combating against the underlying cause of the ache. In addition, breast milk also has anti-inflammatory properties that help in reducing any swelling.

Earache caused by accumulated wax and fluid can be treated using non-prescription ear drops. Although this method is effective, it should not be meted out on children with ruptured eardrum s or those with tubes in their ears.

Garlic has pain-relieving and anti-inflammatory properties that are helpful in treating earaches. Eating at least one clove of garlic daily or apply garlic ear drops to the ear can help to reduce pain and inflammation associated with earache. You can prepare garlic ear drops by cooking it with mustard oil until it is brown. Strain the mixture and allow to cool, and then apply to the affected ear. That said, the use of garlic as treatment for earaches should not serve as a replacement for prescribed antibiotics, instead, garlic should be seen as a booster for the antibiotics.

Applying ginger juice around the outer ear canal can help to soothe ear pain. Like garlic, ginger has anti-inflammatory and analgesic properties that are beneficial in treating earaches.

Mustard oil has a wax-softening effect that is important for treating earaches caused by wax build-up. Alternately dripping a few drops of mustard oil in the ears, one after the other, can help to loosen the wax in the ear and make them fall off.

Earache symptoms like itching and irritation in the ear can be reduced by using peppermint oil. To make peppermint oil, crush some peppermint leaves. Mix the crushed leaves with warm olive oil and strain the mixture. Apply two drops of the mixture to the affected ear two times daily until the earache is gone.

Essential oils like lavender oil can also be used in earache treatment. The emollient effect of the oil, as well as its antimicrobial and pain-relieving properties, is helpful in the treatment of earaches. Placing a cotton ball soaked in lavender essential oil at the ear opening and leaving for some time can help to reduce ear pain.

Oregano oil has anti-inflammatory and antibacterial properties. Like tea tree oil, dilute the oregano oil in olive oil and apply the mixture (in drops) on the outer ear canal. Thereafter, start massaging the ear until the oil is absorbed. The analgesic property of oregano oil also plays an important part here.

A neti pot can be used to drain the nasal passages so as to reduce the pressure and pain on the ear.

Castor oil can help in the treatment of earaches. Castor oil has pain-relieving and wound-healing properties that are necessary in such conditions. Applying a few drops of castor oil to the affected ear and covering with cotton ball for about 5 minutes before removing will help to alleviate the symptoms of the earache. This process should be done two times every day until the symptoms subside.

Coconut oil contains several antioxidants like lauric acid, which is responsible for the oil?s antimicrobial properties. Applying a few drops of virgin coconut oil in the ear (affected by earache) and covering with a ball of cotton for about 15 minutes will help to reduce the pain and any inflammation. One important thing though, ensure you allow the oil to touch all parts of the inner ear by opening and closing the jaw several times.

Medications such as NSAIDs (non-steroidal anti-inflammatory drugs) like ibuprofen and aspirin can be taken to reduce inflammation and pain in the ear. It is important to note that children, especially those below 2 years of age, should not be given aspirin due to the risk of developing Reye?s syndrome.

While many of the above-listed home remedies have not been scientifically proven to be effective in treating earache and its symptoms, several anecdotal reports testify of their effectiveness.

That said, you should consult with your doctor ? in this case, an otolaryngologist ? to know what method(s) should be taken.