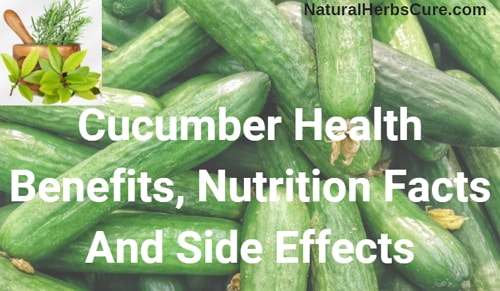 Cucumber is a cylindrical green fruit with a white flesh. It is believed to have first been cultivated in India and has been used for food and medicinal purposes since ancient times. This fruit is a member of the Cucurbitaceae family of vines that also include melon and pumpkin.

Its use as food is seen in sandwiches and salads, as well as prepared for its juice. The cucumber fruit contains a high amount of water that makes it a good detoxifying agent as well as important vitamins and minerals that makes it a natural remedy for various health problems.

In this article, we shall take a look at some of the many benefits of eating this fruit as well as some of the side effects.

Cucumbers are made mostly of water, but they contain essential body vitamins and minerals like vitamin K. The cucumber fruit is also low in fat, cholesterol, calories, and sodium, which are all harmful to the health in large amounts.

The following are some of the health benefits of consuming cucumbers:

Furthermore, you must have seen pictures of persons placing cucumber slices on top of their eyes. What they are doing is not just for fun; they do this to get rid of the dark circles and sagging skin (puffiness) under the eyes. Due to the antioxidants in cucumbers, this topical application of the slices helps to get rid of skin irritation. Moreover, the presence of vitamin C in the fruit helps to lighten up the skin.

Risks and side effects of consuming cucumbers

While the consumption of cucumbers have a lot of health benefits to the body, it should be stated here, that, there are possible side effects and risks to this.

The Environmental Working Group (EWG) recommends that when choosing your cucumbers, you should opt for the organics ones over non-organic or genetically modified ones. This is due to the fact that they found cucumbers to be the ninth most contaminated food.

Another risk of consuming cucumbers is in the fact that the fruit is rich in vitamin K. While vitamin K is essential for good bone health, a high concentration of the vitamin in the body can lead to abnormal blood clotting.

Cucumber, like other members of the Cucurbitaceae family, contains cucurbitacins. Although cucurbitacins have anti-cancer properties, they are also known to be toxic. Hence it is advised that people do not eat the plant on which the cucumber grows. However, common cucumber is not likely to cause this toxicity as the cucurbitacins concentration is not too much.

Cucumber has a lot of health benefits due to the presence of several nutrients and minerals needed by the body. Adding this wonderful fruit to your diet will help to boost your overall health.