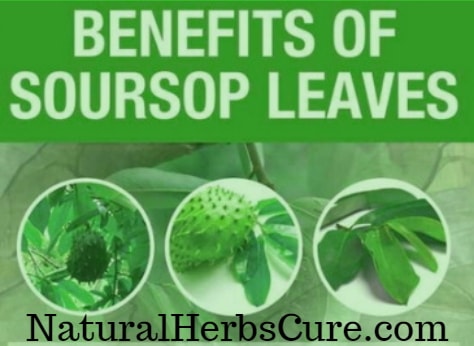 The soursop fruit, also known as Brazilian paw-paw, custard apple or graviola, is the fruit produced by the tree Annona muricata (which can grow as tall as 30 feet). Although the precise origin of this plant is not known, it is found in tropical regions such as the Caribbean?s and South America, where it is abundant. As regards its flavor, the soursop fruit is said to taste like a combination of apple and strawberry with an underlying rich creamy texture reminiscent of coconut or banana.

It is considered an exotic treat, especially for individuals who live outside the tropical regions. Typically, this fruit is eaten raw, by dividing the fruit and eating the flesh. Additionally, it can be made in ice-cream or juices. The leaves and stem are also used medicinally due to their anti-oxidative properties amongst many others.

The soursop fruit, as well as its leaves and stem, have a wide range of health benefits as we shall see in this article.

Soursop fruits are quite loaded with a lot of anti-oxidants which help in reducing the oxidative load in the body. When a cocktail of Vitamin C, beta-carotene, Vitamin E, and zinc is consumed, it can help reduce the rate of macular degeneration by 25% for individuals who already have it. It also inhibits or delays the development of cataracts by reducing oxidative stress.

Applying some parts of the soursop on an inflammation can provide some relief to the inflamed area and speed up the healing process. This is due to the fruits anti-oxidative property. It can neutralize the damages done by free radicals by providing extra anti-oxidants to the immune system.

According to a Nigerian study, two groups of albino rats were used to test for the effect of soursop on diabetes. One group of the rat was consuming soursop while the other group wasn?t. The study showed that the blood sugar level of the first group of the rat was considerably lower than that of the second group. Soursop can help in the production of insulin in the pancreas has been found to inhibit the oxidative damage in diabetic patients.

It has been suggested that soursop in addition to providing relief from inflammation, can also provide relief from pain by inhibiting pain receptors or painful stimuli. It seems however that its ability to relieve pain is dose-related, which means that as you consume more soursop, the effect of pain relief is increased. Try not to eat too much as it can have adverse effects when taken too much. Applying soursop topically on wounds is a fast way of relieving the pain and increasing the speed of healing.

In an experiment, the pain was induced in rats and soursop extract was used to treat the pain.

You can make an extract by brewing a tea from some of its leaves to help kill worms and cleanse your gut.

Due to its anti-ulcer properties, the graviola is greatly associated with decreasing ulcer development. It acts by reducing the effect of oxidation in the stomach, preserving the mucus lining. This is especially good for individuals who have a stomach ulcer as a result of non-steroidal anti-inflammatory drugs (NSAIDS). In addition, it is possible that the soursop fruit can also protect your stomach from the ulcer bacteria, Helicobacter pylori.

Using the soursop is a reliable way of removing phlegm and mucus from your body. It acts by making the mucus secretions thin. Due to its anti-microbial property, it aids the clearance of pathogens present in the respiratory tract. If you have an irritation in your throat, the graviola can help provide relief from the irritation.

During the break down of red blood cells in the body, bilirubin which is accumulated can fail to get metabolized and this can lead to a condition known as jaundice. Soursop helps prevent this condition by bringing the level of bilirubin down the one which is acceptable. It can also prevent jaundice caused by medication. Soursop has been shown to aid the process of digestion of fat in the body and to purify the liver. This helps the liver to work in good conditions.

Soursop is mostly known for its anti-oxidant property because it is quite loaded with anti-oxidant compounds. These compounds help to protect our body from the numerous threats it faces every single day. The soursop possesses nutrients, such as Vitamin C, which stimulates the production of lymphocytes and T-cells in the body. These lymphocytes and T-cell s act as defenses against foreign materials, such as bacteria, fungi, as well as others.

Well, the soursop plant is also believed to help the skin by removing wrinkles, spots, and blemishes found on the skin. It can prevent the aging of the skin by nourishing it making you look quite younger than your age. Extracts of the soursop leaves have been found to prevent a skin disease known as skin papilloma. This disease causes tumors to erupt on the skin of the individual. In some places, the leaves of this plant are used to calm the skin of babies.

To use on your skin, grind the seeds into a fine powder that can be formulated into a skin astringent and apply on the affected areas regularly.

Some sources say that soursop paste can help to treat dandruff and itching of the hair. They also suggest that the paste can strengthen the hair as well.

The soursop fruit and leaf extracts are effective in treating a wide range of infections such as those caused by bacteria and parasites.

The graviola possesses a lot of minerals such as iron, sodium, calcium, magnesium, and copper. It is a good source of energy because it contains fructose, a natural sugar which can provide energy to the body. Eating this tropical fruit at breakfast can give you the needed energy to start your day.

HOW TO MAKE SOURSOP LEAVES TEA

SIDE EFFECTS OF SOURSOP LEAVES

There have been claims on the usefulness of soursop leaves in the treatment of cancer. It is believed that the leaves are rich in tannins a compound which is great at fighting cancerous cells. Many people have claimed on the internet to have benefitted from the soursop leaves to treat cancer. In fact, certain studies have been done to discover if the leaves are actually good in treating cancer. In one study, the soursop leaves were tested on breast cancer cells in culture and interestingly, it was found to be more effective than using chemotherapy.

However, this theory hasn?t been studied on humans, and as such, there is no scientific evidence to back up the claim of it curing cancer. Hence, it is advised you inform your physician first before taking the soursop fruit or tea.

As stated earlier, laboratory studies have found that rats who take soursop have a lower blood sugar level than those who do not. This could possibly mean that the soursop leaves extracts may be effective in treating diabetic patients. Many people have attested to its effectiveness. However, this hasn?t really been tested with humans. One thing is clear though, it possesses some anti-diabetic properties.

Soursop leaves are used as a sedative in parts such as the West Indies. In other regions, the leaves are used to enhance sleep. While there are writings suggesting its effectiveness in enhancing sleep, there has been no scientific data to back this claim. However, it doesn?t make these claims less valid.

Soursop leaves are effective for weight loss as they bind fat and calories which have been piling up in the body and remove them through excretion.