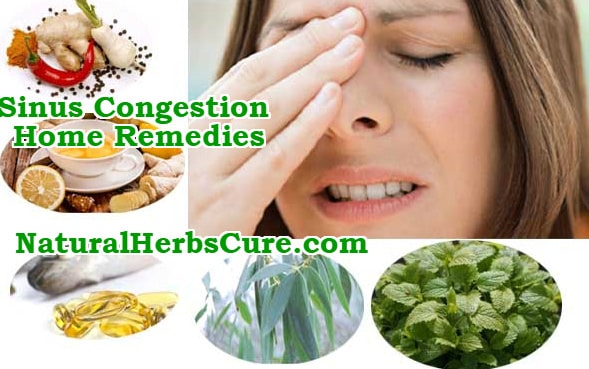 Every year, an estimated 35 million U.S. citizens visit the hospital for sinusitis. Even more, the money spent on treating acute and chronic sinusitis each year in the United States is estimated to be over $11 billion.

More than a stuffy nose, a sinus infection can actually be uncomfortable and painful. While most cases of sinusitis can be treated by using a decongestant, few cases may often require surgery to drain mucus from the sinuses.

In this article, we shall be taking a look at natural remedies for sinus congestion and inflammation. But first, let?s get to understand sinus infections a little.

What is sinus congestion?

Sinus congestion, or sinusitis, is an infectious condition that is marked by the inflammation of the sinuses and an excess production of mucus, which leads to a blockage or congestion.

The sinus is an air-filled hollow cavity in the skull bones around the nose. An infection of the sinuses can lead to their inflammation and they become filled with mucus and germs, instead of air.

Sinus congestion can be as a result of different factors. The causes vary from allergies to flu, or an infection. As a result, sinusitis can be grouped into viral and bacterial types, based on the type of disease-causing organism.

Sinus infections caused by a virus are mostly acute and last for short periods of time that can span no more than a maximum of 10 days. If the symptoms of the sinus infection go beyond 10 days, then it is most likely that it is caused by bacteria.

The following are some of the common signs and symptoms of sinus congestion:

If the sinus infection continues for more than 12 weeks, then it is case of chronic sinusitis, which may come with added symptoms like:

The following are some of the natural remedies for sinus congestion and inflammation:

Hydration is one of the simplest, but yet effective natural ways of treating various health problems, including sinus congestion and inflammation. Drinking lots of water and other helpful fluids will help to thin out mucus in the sinuses, so as to clear the sinuses. You should make sure to avoid alcohol and caffeine, as these beverages tend to dehydrate the body rather than to hydrate.

Nasal irrigation, also known as saline irrigation or nasal flushing, is a way of clearing the nasal cavity of excess mucus. Sinus congestion and irritation can be relieved by flushing/irrigating the nose with a solution. You can make a saline solution for clearing the sinuses by adding half a teaspoon of salt to half a cup of tepid water, and then dripping the solution into each nostril.

This oil is rich in essential minerals and vitamins like vitamins A and D. One good thing about this oil is the fact that the nutrients are preserved during the fermentation process. Adding fermented cod liver oil to your meals or using it for cooking will help to boost your body?s immunity against diseases.

The sinuses are extensions of the digestive tract. This means that there is a relationship between digestive health and respiratory health. An unbalanced gut flora can lead to a weakening of the body?s defense system ? which is mostly in the gut. That said, a sinus infection can leave the gut flora depleted, which, in turn leads to a compromised immune system. To remedy this situation, it is advised that you eat more foods that are rich in probiotics ? beneficial bacteria that constitute the gut flora. Examples of probiotic-rich foods are kefir, kimchi, yogurt, and sauerkraut.

Respiratory conditions like cold can be the cause of your sinus congestion. If this is the case, then you can benefit from the antibiotic and antioxidant properties of garlic. Garlic?s antibiotic properties are attributed to the presence of allicin. Eating garlic cloves daily can help to reduce the risk of developing common cold, as well as in improving some of the symptoms of sinus congestion.

Eucalyptus oil is another natural remedy for sinus infections, including sinus congestion. Based on report from the University of Maryland Medical Center, eucalyptus oil can be used as a sinus decongestant because of its phlegm-loosening property. You can use the oil by dripping a few drops into a bowl of boiled water and with your head bent towards the bowl, start inhaling the steam (ensure to cover your head with a towel so as to get the most of the steam).

The menthol present in peppermint oil can be beneficial in treating sinus congestion and inflammation. Menthol helps in this way by stimulating the receptors in the nose to give the nose a feeling of decongestion.

Based on anecdotal reports, eating too much horseradish can help in treating sinus congestion. To get the most from horseradish, mix some horseradish powder with lemon juice and drink.

Like most other herbs on this list, onion?s decongesting property is due to its anti-inflammatory effect. Onion as a natural remedy helps to reduce inflammation of the sinuses, thereby reducing the pain and mucus production. To reap the benefits of onion as a sinus decongestant, get some fresh onions and chew, or add onions to hot water and inhale the aroma.

Turmeric is rich in antioxidants and other beneficial chemical compounds like curcumin, which has anti-inflammatory properties. Turmeric powder can be mixed with ginger root and prepared as tea. The combination of turmeric and ginger helps to thin out mucus from the nasal cavities. Moreover, treating sinus congestion can cause an upset stomach, which can be alleviated by the ginger root.

Oregano oil has antimicrobial properties that should come in handy when treating sinus infections. Drip a drop of oregano oil in a cup of water or tea and drink once each day to alleviate the symptoms of sinus congestion. You can also apply oregano oil topically on the neck to relieve mucus congestion.

Apple cider vinegar is a storehouse of many helpful chemical compounds. You can benefit from apple cider vinegar by adding two to three tablespoons of the raw liquid to a cup of hot water or tea. Repeat the procedure two more times daily.

Echinacea plant can also be used in treating sinus congestion. This is because Echinacea possesses anti-inflammatory and antimicrobial properties that help in reducing swelling and in fighting off viruses and bacteria responsible for sinus infections. In addition, Echinacea?s immune-boosting property can help in strengthening the body?s immune system in combating infections.

You can chew on some fresh ginger roots or drink ginger tea to relieve sinus inflammation and congestion. Ginger contains several helpful compounds that help in reducing mucus in the sinuses, as well as in reducing the swelling.

Taking 2 to 3 teaspoons of natural local honey twice each day can help to clear the congested sinuses. Another way to benefit from honey is to add it to beverages before drinking. Among other health benefits, honey?s anti-inflammatory and antioxidant properties are helpful here.

You can relieve sinus congestion by drinking up a bowl of chicken soup. This helps because chicken contains cysteine, which is an amino acid that helps to thin out mucus in the nasal cavity.

Pineapple contains bromelain, an enzyme that has anti-inflammatory, astringent, and mucus-loosening properties. You can cook the pineapple if it is too tart for your mouth.

Lemon?s antioxidant and astringent properties can help in the treatment of sinus congestion. You can add a few drops of lemon juice to water and drink if you are feeling congested.

Add a pinch of table salt and some crushed cloves of garlic to blended tomato juice and drink up if you have sinus congestion. This mixture is a fast and effective method of alleviating the symptoms of sinus infections.

You can use fenugreek seeds to reduce mucus build-up in the sinuses. Get some fenugreek seeds and pour to a cup of water and bring to boil. Allow the mixture to cool, then strain and drink.

Sinus infections are becoming more popular and a great reason for many hospital visits each year. And with many of the antibiotics available being ineffective against viral sinus infections, choosing to go with natural remedies seem to be a good option.