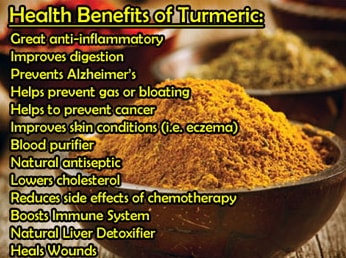 Turmeric is an herbal plant that has several medicinal benefits which we?ll get to know in a short time. In this article, we will take a look at some of the health benefits and side effects of including turmeric in our diet. But before then, let?s get to learn some more about this wonderful herb.

What is turmeric and what is curcumin?

Turmeric is a root herb and a distant cousin of ginger. It is a major component of curry powder and offers a lot of health benefits. Although this herb is now commonplace in our kitchens, it was originally cultivated in India where it was used not just as a spice for food but as herbal medicine.

Nowadays, you can find turmeric in curry; the yellow color of curry powder is due to the presence of turmeric.

This brings us to curcumin.

The active compounds in turmeric that gives the spice/herb its officinal properties are called curcuminoids, chief of which is curcumin. Curcumin is a phytochemical that has several health benefits, of which its anti-inflammatory properties is prominent. That being said, turmeric is the best source of curcumin naturally.

Based on scientific studies and research, the following are some of the benefits of turmeric/curcumin

Normally, the body allows blood to clots in order to preventing bleeding; however, there can be an unusual clotting of blood due to some deficiency or some other reason(s). Various research studies have shown that curcumin has anti-coagulating properties that make turmeric beneficial for reducing abnormal blood clotting.

Turmeric has no cholesterol as previously stated; this makes it a healthy spice for controlling body cholesterol. Although more studies still need to be done, a few research results have hinted at the potential of curcumin in helping to maintain HDL (good) cholesterol levels.

This is unarguably the most prominent benefit of using turmeric. Curcumin in turmeric is generally known for its anti-inflammatory effects. Thus, people suffering from inflammatory problems can benefit greatly by adding turmeric to their daily diet.

A recent study reports that regular consumption of curcumin can help to lower the risk of type 2 diabetes. Furthermore, a 2009 research publication showed that curcumin in turmeric is effective in activating an enzyme necessary for reducing the body?s resistance to insulin.

The benefit of the antioxidants found in turmeric is multi-faceted. For one, these antioxidants help to inhibit the effects of free radicals while the immune-boosting property is another. Many health conditions result from oxidative damage due to the action of free radicals. By providing the body with antioxidants, the consumption of turmeric helps to reduce the effects of these free body radicals, thereby, preventing diseases.

Inflammatory eye problems such as conjunctivitis and uveitis can be treated using turmeric. This is simply because of the anti-inflammatory effects of curcumin in turmeric. A study reported in a research journal showed that chronic anterior uveitis patients experienced some improvement after 14 days of administering curcumin thrice daily.

Turmeric contains zero cholesterol making it healthy for the heart. Moreover, the presence of antioxidants, potassium, and fiber makes the root great for heart health. The risk of heart related diseases such as stroke and atherosclerosis can be lowered by adding turmeric to your diet.

Curcumin found in turmeric has been shown to have anti-cancer properties that makes the herb beneficial in preventing the occurrence of cancer cells and may also inhibit metastasis (the spread of cancer cells). Moreover, systemic inflammation is a contributing factor to the development of cancer cells in the body; hence, anti-inflammatory foods/herbs like turmeric can benefit the body in reducing such inflammation. Also, a research has reported that curcumin can help to prevent angiogenesis ? another major contributor to the spread of cancerous tumors.

Studies have found that curcumin is beneficial to brain health. One of such studies hinted at the effectiveness of curcumin in treating aging-related brain disorders like Alzheimer?s and Parkinson?s. Also, the intake of turmeric helps in promoting proper cognitive functions. Aside from these, the anti-inflammatory properties of curcumin have also been investigated as possible treatment for Alzheimer?s.

The symptoms of depression can be effectively reduced by using turmeric. Although more human clinical trials are still required for this subject matter, many studies have shown that turmeric can be used for treating depression. It is thought that perhaps such reports hinge on the fact that curcumin affects the nervous system through the BDNF (brain-derived neurotrophic factor). Even better, some other studies have reported that the use of turmeric in the treatment of depression patients promises more effectiveness than pharmacological antidepressants available today.

The liver is an important organ in the body that is responsible for filtering out toxins. Prolonged intake of harmful substances can affect the proper functioning of the liver due to the residual toxins. However, the antioxidants in turmeric help to protect the liver from such damage. Aside from this, a research conducted at the Medical University Graz, Austria suggests that cirrhosis (a chronic liver disease) can be prevented with curcumin.

Continuing from the previous point, the consumption of turmeric does not detoxify the liver only, but also helps to clean virtually the entire body system.

Beyond the spicy taste that turmeric gives to your food, it also plays an important role in digestion. Digestion problems like irritable bowel syndrome and inflammatory bowel disease can be treated using curcumin.

Skin diseases such as dermatitis ? an inflammatory disease ? can be prevented by using turmeric. In addition, studies have shown that the use of curcumin-based creams or supplements is effective in the treatment of psoriasis and vitligo.

Various studies and anecdotal reports have confirmed the pain relieving effect of turmeric. Moderate doses of turmeric powder can help to relieve different types of pain. This is possible due to the fact that turmeric helps to inhibit the activity of Cox-2 ? an enzyme that contributes to pain and inflammation ? in the body.

A recent study found that obese persons can benefit from turmeric due to the anti-inflammatory action of curcumin. Obesity is as a result of several factors including some processes that are inflammatory. By stopping these inflammatory processes, curcumin helps to reduce obesity.

Burns and cuts can be treated with turmeric. This is because turmeric also has antibacterial properties that help in fighting off pathogenic microorganisms.

Risks and common side effects of turmeric/curcumin

Turmeric/curcumin has numerous health benefits that make it a wonderful spice or herb. Notwithstanding, there are adverse side effects that you need to be aware of when using the spice. Some of these risks and common side effects are:

Studies have shown that the use of turmeric helps to improve digestive health by promoting the production of gastric acid in the stomach. While this may be beneficial to some individuals, it can cause stomach upset in others. Hence, it is recommended that only moderate amounts of the spice/herb should be used at a time.

Since one of the benefits of using turmeric is for the prevention of abnormal blood clotting, it goes on to say, that, an overuse of this herb can lead to thinning of the blood. As a result persons on blood-thinning medication are advised to avoid taking turmeric in large amounts.

Overconsumption of turmeric can lead to digestion problems like diarrhea, heartburn, and bloating.

Due to the blood-thinning effects of turmeric, pregnant women are advised to stay away from turmeric supplements as their intake can induce contractions in the uterus.

Other side effects of using turmeric are allergic reaction, low blood pressure (hypotension), headaches, nausea, and increased menstruation in ladies.

We have considered the health benefits of turmeric/curcumin as well as some of the possible adverse side effects. That said, it is important to state here that this article is for informative and educational purposes and only meant to serve as a guide. It is not supposed to replace any professional medical advice. Hence, it is important that you consult with your doctor before going on with the prescribed remedies.