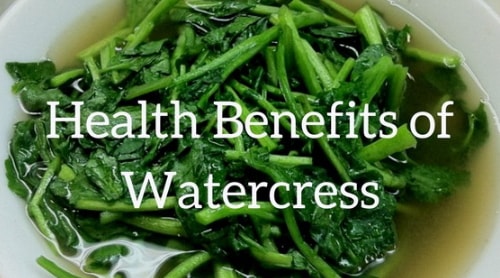 The watercress with the botanical name Nasturtium officinale is one of the oldest vegetables humans have consumed for millennia. For many years, this aquatic plant has been cultivated and used as food and medicine by many people. Native to Asia and Europe, this plant can be seen near slow-moving streams or springs.

It is important that they are washed thoroughly before they are consumed. This is because they grow in water and microorganisms can easily be found on the leaves. For many, the watercress is a plant of medical value. The health benefits of consuming the watercress are too numerous to count.

The watercress is very rich in Vitamin C. In fact, it contains more Vitamin C than an orange does. Its rich supply of Vitamin C helps the body in preventing various diseases while maintaining blood levels.

The Vitamin C is also needed by the body to carry out its function at optimal levels. It helps reduce the risk of blood cell damage and can repair brain tissues.

Watercress possesses some phytonutrients that can help in preventing cancer. It can increase some substances in the body which can stop cancer (such as breast cancer) or prevent it from returning.

A compound called 3, 3?-diindolylmethane (DIM) has been shown to be able to exert some protective effects against cancer and it protects tissues in the body during treatment of cancer. A study was carried out on rats at George Town University. There were two groups of rats and each group was given a lethal dose of radiation. For two weeks, one class was treated with a daily injection of DIM while the other class was left untreated. At the 30-day mark, 50% of those rats that took DIM were still alive while all those who were left untreated died.

Another compound known as sulforaphane has been found to inhibit the enzyme histone deacetylase (HDAC), which is believed to be involved in cancer cell progression. For foods that contain sulforaphane, this ability to inhibit HDAC could make them an important part of cancer treatment. Sulforaphane is now being studied as to how it can help against cancer and these research has shown that people who eat 80 grams of watercress daily are less likely to have cancer. 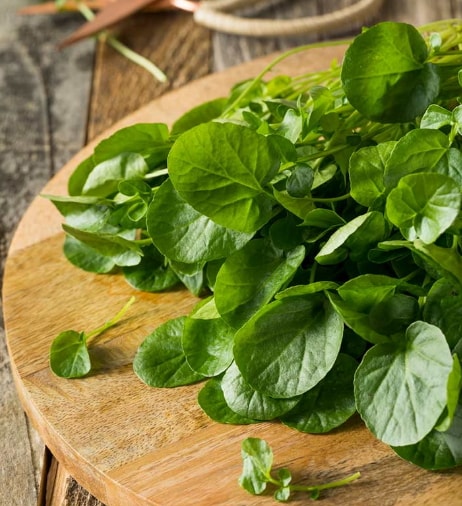 Watercress contains antioxidants which help them fight against diseases in the body caused by virus, fungi, or bacteria. They remove free radicals from the body and prevent inflammation, thereby boosting the immunity of the individual.

When there is an overproduction of thyroid hormone in the body, a person can suffer from diseases such as goiter or hypothyroidism. Watercress, when eaten raw, helps reduce the secretion of these hormones. You can also steam the watercress so as to extract all of its nutrients.

Watercress is a healthy source of minerals and can help lower the blood pressure of individuals. You might not get the same health benefits, however, if you take minerals in supplement form.

Watercress can stimulate the production of enzymes which help in cleansing the body system and detoxifying the liver, thus reducing the effect of the hangover after drinking excessively.

Folate is a nutrient that helps in the daily body maintenance and preventing birth defects in newborn babies. Usually, the folate level in the body can be affected by alcohol. Hence, eating foods rich in folate, such as watercress can help the body prevent and maintain certain conditions in the body.

It has been found that when the folate levels in the body are low, it increases the risk of depression. Adding watercress to your daily diet can help reduce the risk of getting depressed.

It has been found that food which contains folate are effective in fighting stroke. Eating watercress can reduce the risk of getting a stroke and can be used for a person who has a stroke.

Additionally, folate can help in the development of the embryo during pregnancy.

Watercress is very rich in iron which the body needs to produce hemoglobin. The hemoglobin helps to increase the production of red blood cells in the body. For people who have lost a lot of blood or are genetically iron deficient, consuming watercress can go a long way in reducing it.

The calorie content of watercress is low, making it very easy for people who wish to lose weight. In addition, watercress contains dietary fiber and amino acids, which makes you feel full, preventing casual snacking.

The watercress plant can increase diuresis, which will help remove toxic materials from the body. It also possesses cleansing agents which are needed in order to purify the body.

Watercress contains an antioxidant called alpha-lipoic acid which helps reduce glucose levels in the body, increase insulin sensitivity and prevents the changes as a result of oxidative stress.

Certain studies on alpha-lipoic acid have shown that it can reduce peripheral and autonomic neuropathy in diabetes. Most of these studies, however, use only intravenous alpha-lipoic acid. There are still some uncertainties regarding oral supplements and if they can produce the same effects.

One study suggests that a combination of Vitamin C and E can help reduce the oxidative damage to red blood cells. While the study was based on supplements, they suggested that an intake of food items that contain this Vitamin (such as watercress) can be very helpful.

Due to its high water content, the watercress is helpful in removing harmful toxins that might hinder the function of the gallbladder.

The Vitamin C present in watercress can help repair brain tissues and can prevent cognitive changes as a result of aging. It can also prevent brain damage while improving brain injuries.

Some studies have shown that individuals who sustain head injuries, usually have a low concentration of Vitamin C in their body. Vitamin C may also have a part in neuron building.

Watercress is known to contain a compound which has been identified as sulfur glycosides, which can treat any disease that is related to longterm bronchitis, especially cough. Studies on the protective abilities of Vitamin C shows that when you consume food that is rich in Vitamin C, it can reduce your risk of getting a cold by 66%.

One study suggests that Vitamin C can be very effective in reducing the risk of developing cataracts in the eyes. Including watercress in your daily diet may be very helpful in protecting your eyes against the development of cataracts.

Watercress is a very rich source of calcium which can help in producing healthy, strong teeth. It can also cure gums if they are bleeding.

Watercress can also help build and repair your bones by increasing the production of osteoblasts in the body. Osteoblasts are responsible for repairing and building bones in the body.

SIDE EFFECTS OF WATERCRESS

100 grams of watercress will meet the following daily requirements:

HOW TO EAT WATERCRESS

HOW TO COOK WATERCRESS

WHERE TO BUY WATERCRESS