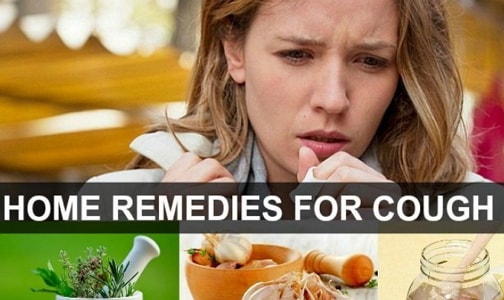 12 Effective Home Remedies For Dry Cough & Cold In Adults & Children: How To Stop Coughing Without Medicine

Coughing is a normal reflex action that aids the clearing of irritants and mucus which are present in the airways or respiratory tract. It is not in itself a sign of a serious condition as it is normal for everyone. However, a sustained cough could be a symptom of a number of conditions which includes cold, infections, as well as allergies. For persons who do not fancy over-the-counter drugs (perhaps due to the chemicals present in these drugs as well as the side effects associated with them), home remedies, which involves the use of natural products, could be a preferred method of relieving cough and cold.

The use of honey is an effective way of relieving cough and could be more effective than the use of over-the-counter drugs. Research, however, shows that dark honey such as buckwheat-flavored honey may be more effective in relieving cough since it contains a significantly higher number of antioxidants. Honey helps to soothe a sore or itchy throat. It is a preferable remedy because it tastes good, especially for kids and because it is quite affordable to purchase.

If your child is between the ages of 1-5, half a teaspoon should be given and for those aged 6-11, a teaspoon should be given. For adults, however, you can mix two teaspoons of honey in herbal tea or warm water to aid relieve of a cough. It is advised that you reduce the use of honey if you are diabetic. However, it is important to note that honey should not be given to children less than 1. This is because the child?s digestive system cannot handle botulism spores which are present in honey.

Chicken soup possesses anti-inflammatory properties which help to soothe a sore throat and it also prevents nasal congestion. The chicken soup is prepared with various ingredients which all contribute to its effective treatment of a cough. These ingredients include: rosemary which is an oral disinfectant, oregano which reliefs cough, thyme which can boost your immunity or that of your child, lemongrass which can also provide relief to sore throats, turmeric, celery which is also used to boost one’s immune system, chicken bone, ginger, garlic as well as turmeric.

To prepare a chicken soup, add garlic, ginger, and onions into a large pot with heated oil and leave for about 3 minutes. Next, add celery, lemongrass, turmeric, as well as other herbs you intend to use and allow to cook for 2 minutes. Pour water into the pot after which chicken, pepper, and salt are added. Allow it to boil for an hour. You can add more pepper or salt depending on your taste. Straining is not really necessary. However, whether you want your soup strained or not, you can be sure it will still have the desired effect in relieving cough and cold.

Make sure you take it while it is hot as the heat is helpful in relieving cough. Other examples of soup that can be used as well include garlic spinach soup, tomato fennel soup, healing cabbage soup, miso soup, super-hot and sour shrimp soup, spicy chicken Thai soup, as well as the chicken noodle soup.

Humidifiers are helpful because they add the much-needed moisture back into the air so one can breathe faster. Humidifiers like the warm mist humidifiers aid in killing bacteria because they provide warmth. They provide moisture for dry throats. As regards to the type of humidifier that you can use, find out which one would best fit your needs.

This method of treating a cough is most effective for children at 5 years and below, although it can be used for children up to the age of 12. Tuina massage can be used to treat all kinds of a cough in children.

It contains 5 basic techniques which are:

Peppermint contains menthol which serves as a decongestant that makes the mucus thinner. Menthol also aids in soothing coughs and dry throats. Peppermint should not be used on infants and peppermint oils should not be taken orally.

To relief your cough, try drinking peppermint tea or inhaling peppermint vapors from steam bath. To do this, make a steam bath after which you add a few drops of peppermint oil. Take a towel and wrap around your head as you inhale the steam by taking deep breaths. Peppermint oil is also used to massage because it is a good decongestant.

This remedy is useful for stuffy noses which can cause difficulty in breathing. This process involves the use of a saline solution to clear the nostrils by pouring the solution of salt and water through one nostril and removing it through the other nostril. In this method, the water that flows through the nostrils helps washes away the mucus in the nose so one can breathe properly.

Take a cup of water and mix a teaspoon of salt into it to produce a saline solution. Bend your head to a preferable side as you slowly pour the saline solution into one nostril and allow the solution to flow out of the second nostril. Do this at least once a day to prevent stuffiness in the nose.

These liquids help to thin out the mucus and make coughing easier. They also aid hydration, especially in children. Warm liquids help to soothe sore throats. Cold ice water, warm juices or water are examples of liquids that can help in relieving cough and cold.

This simple and very cheap method is helpful in a soothing cough, especially one due to a scratchy throat. The salt and water solution possesses anti-inflammatory properties, hence, reducing swelling in the throat. It also helps to loosen the mucus in the throat, making it easier to remove bacteria and irritants in the throat.

Children under the age of 6 years are not good at gargling and could swallow the solution. This is why it is preferable that gargling is done by an adult and other remedies are used for children.

Take half a teaspoon of salt and dissolve in warm water and then gargle to relieve irritation. The effect can last for several hours. Do this at least three times a day.

The warmth that comes from the steam is effective in loosening the mucus in the air passages and it aids the removal of mucus from the nose. The use of steam helps to provide moisture to dry airways and to relieve inflammation in the airways.

Heat some water after which you can add some drops of eucalyptus. Wrap a towel around your head or that of your child and inhale the steam. Do this at least two times every day especially in the night before going to bed as this clears up congestion in the nose and throat to provide a good night rest. It will also help to reduce the number of times you actually cough while asleep.

You can also let the hot water run in the shower for a couple of minutes while the door is closed. This will fill the room with enough steam for you to inhale.

Ginger contains anti-inflammatory properties which relief?s inflammation in the airways as well as a sore throat. Ginger also helps in drying the mucus and removing phlegm from the respiratory tract.

To make ginger tea, cut some fresh ginger and boil in water for a few minutes. You can add a little honey to this tea and sip while it is still warm. You can also decide to mix ginger with some honey to make a syrup and take a teaspoon.

Lemon is rich in vitamin C, a powerful antioxidant which can boost one’s immune system. It also possesses antiviral properties which help to kill viruses in the throat.

To use lemon to aid in soothing the cough, slice one into two and juice one half of the lemon. Add some hot water to dilute the lemon juice. Put one or two teaspoons of honey in the liquid, stir and drink. You can drink this twice a day until you see changes.

Turmeric is effective in relieving cough due to irritation. Its main active ingredient, curcumin is useful for fighting viruses and bacteria as well as relieving inflammation.

These are a few of the home remedies that can be used for relieving cough in children and adults. If after trying these remedies the symptoms persist or get worse, seek medical attention. Also, learn to prevent catching a cold by taking preventive measures. This includes washing your hands regularly and making healthy lifestyle changes.