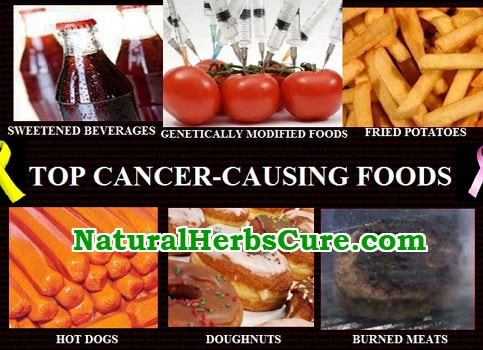 20 Cancer Causing Foods And Drinks To Avoid. List Of Dangerous Foods That Cause Cancer

Cancer continues to cause so many deaths each year; scientists have already made predictions that show an increase in cancer-related deaths in the future. While cancer is caused by different factors with some of them beyond our control such as genetics, we can help to reduce the risk by trying our best to avoid the factors which are within our control i.e the preventable factors.

Having said that, one of the most touching, but avoidable factors in this regard is what we eat (and drink). What we eat goes a long way in determining a lot about our general health. The fact remains that some of the foods which we cherish and consume daily have the potential of causing cancer.

Foods high in fats and other carcinogenic substances increase the risk of cancer as well as foods with a low healthy nutrient content.

Hydrogenated oils refer to oils which have been transformed into solid fats and contain trans-fats ? an unhealthy type of fat. The U.S. FDA even advises that not all trans-fats are safe while various reports have suggested that trans-fats have the potential of causing health problems including heart disease and cancer. One example of this type of oils is vegetable oil. You should go for healthier oils like organic coconut oil or organic sustainable red palm oil.

Potato chips or French fries are crispy and tasty, as well as cheap and common. However, they are known to have high levels of trans-fats which promote weight gain and heart problems. Besides their high trans-fat content, potato chips also contain artificial preservatives and flavors, and high levels of sodium which are all harmful to the body. Instead of snacking on potato chips, you should opt for healthier alternatives like baked apple chips or pretzels.

GMOs refer to organisms which have been genetically altered through artificial methods. In this context, GMOs are crops or foods whose genetic materials have undergone some man-made modifications for the purpose of producing better products. While the U.S. Department of Agriculture has given her ?stamp of approval and safety? to GMOs, you may need to reconsider. Since the introduction of GMOs in the late 90s, the rates of chronic ailments and allergies have astronomically risen in a short period of time. A research which was done on rats by feeding them with genetically modified vegetables showed that the risk of cancer development increases with the consumption of GMOs. Apart from this, it has been proven that GM foods which were sprayed with glyphosate ? a common pesticide ? during farming can increase the risk of developing cancers like Non-Hodgkin?s Lymphoma. Thus, you need to stay away from GMOs and the surest way of doing that is by going for organically certified foods.

Cancer thrives on sugars, not natural sugars anyway but the refined types. This is because refined sugars lead to a surge in insulin levels which in turn stimulates the growth of cancerous tumors. Of the many types of refined sugars, high-fructose corn syrup is regarded as the major culprit in relation to cancer proliferation. Instead of bingeing on foods with refined sugars, you should consider those with natural sugars such as honey.

Refined or processed white flour has been shown to be unhealthy as it lacks most of the vital nutrients found in the unprocessed version. This type of flour is made by chemically bleaching the flour which leaves traces of the chemicals in the flour. Moreover, the sugar content of white flour is on the high side, which is another reason to avoid this flour as it can potentially increase your insulin levels leading to other health problems aside from cancer like diabetes. Examples of healthy non-cancer-causing flours that you should consider are organic sprouted whole wheat flour or organic sprouted buckwheat flour.

The benefits of consuming tomatoes can be limiting when it is packaged in cans. Tomatoes are rich in lycopene ? a cancer-fighting substance, but when they are packaged in cans their cancer-combating capabilities are neutralized due to the chemicals like BPA (Bisphenol-A) in the cans. This neutralization does not stop as the chemicals are more potent than the lycopene and can lead to cancer formation. Instead, go for fresh tomatoes to reap the benefits of this wonderful cancer-fighter.

According to a study by the University of Hawaii, processed meats such as hot dogs and bacon have been found to be linked with pancreatic cancer. These cured meats are prepared with too much salt and preservatives which are harmful to the body. It has also been shown that hot dogs contain a carcinogen, sodium nitrite, which was linked in the 70s to the increasing risks of leukemia. Therefore, it is highly recommended that you opt for meats which have no synthetic nitrates such as organic uncured meats.

Artificial sweeteners are unhealthy to the body, which is the short and sincere fact. ?People who use artificial sweeteners for the purpose of weight loss are doing a great harm to their bodies as these sweeteners have been linked to various health conditions like cataracts, convulsions, and cancer.

Wild salmon contains high levels of omega-3 fatty acids which are considered as healthy fats and have cancer-fighting capabilities; however, the farm-raised salmons do not offer the same benefit. Farmed salmons have been found to be rich in carcinogenic substances like PCBs (polychlorinated biphenyls) and pesticides.

Smoked foods contain tar which is also found in cigarettes while their saltiness may be as a result of using nitrates for preservation. Cancers like gastric and colorectal cancer have been shown to have a link with salty and smoked foods.

Microwave popcorn is quick and easy to make, hence, its popularity. Unfortunately, that simplicity and instancy of preparation can be shortly enjoyed as both the popcorn and its package have been found to contain cancer-causing chemicals. The consumption of microwave popcorn can increase the risk of developing pancreatic, liver, and testicular cancer. Even more, a Doctor proved that the inhalation of too much microwave popcorn can lead to lungs damage. So this may be a good time for you to get rid of all the microwave popcorns in your cabinet.

After tobacco, alcohol is the next major cause of cancer. Although moderate consumption of alcohol may have some health benefits like reducing the risk of some health problems, overdoing it is where there is a problem. Colorectal, liver, oral, and breast cancer can be linked to excessive alcohol consumption.

Various studies have found that the consumption of fizzy drinks can increase the risk of cancer development. The reports show that people who regularly consume soft drinks ? which contain too much sugar ? have an increased risk of developing cancers than people who do not.

Like alcohol, bingeing on red meat can increase the risk of cancer by 22% and 20% in men and women respectively. It is advised that men over 40 should stay away from this type of meat; nonetheless, the same warning can be applied to other age groups and females. If you cannot stay away from red meat make sure that it is grass-fed and organic.

Contrary to what you may think, diet drinks and low-fat or fat-free foods may not be the ideal replacement to their regular versions. This is because these foods and drinks while obviously omitting the harmful fats and sugars have replaced them with harmful chemicals, if not more harmful. For example, diet drinks are laden with artificial chemicals such as artificial flavors, colors, and sweeteners. These artificial chemicals have been found to have carcinogenic properties that can cause cancer. Both the FDA (Food and Drug Administration) and the NCI (National Cancer Institute) have pointed out that artificial colors used in these foods and drinks are carcinogenic, but manufacturers have blatantly refused to do away with them. So, if you want to reduce your risk of developing cancer you may have to stick with the regular variants of these drinks and foods; however, you need to apply moderation.

Bagels have a high-glycemic index, in other words, they have too much sugar and have the potential of rapidly increasing the blood sugar levels. And as has been already stated, cancers thrive on sugars. Thus, along with bagels, other high-glycemic index foods like corn flakes and white bread should be replaced with low GI foods like brown rice.

Slightly burning your meats to get a distinguishing taste comes at a price. Reports have shown that grilling meat under very high heat produces carcinogenic substances in the meat. Thus, you need to reduce your grilling, or give it up completely.

Nowadays, it is common for farmers to use chemicals on their crops to yield bountiful harvests. The unfortunate part of this, however, is that most of these chemicals are harmful on the body and have been linked to different types of cancer. This is a good reason for you to go for organic foods or to thoroughly wash your non-organic foods with water, albeit you won?t get rid of all the chemicals.

Drinking soda in moderation may not have any harmful effect on the body, but the same is not the case when done in excess. Sodas are filled with sugars and over-consumption of sodas packs the body with these sugars. Don?t forget that ?CANCERS THRIVE ON SUGARS.?

Like potato chips like plantain chips, frying your foods can increase the risk of not only cancer but other health problems like heart disease. Hence, it is better to bake or cook your foods than to fry them.