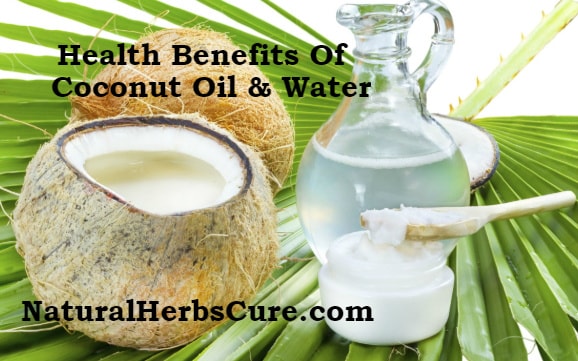 Unlike most other ?nuts,? coconuts are not really nuts; they are fruits with an edible white part surrounding a cavity and covered by a fibrous husk. This fruit has been prepared by nature in an impressive package which has been hermetically sealed to prevent contamination.

Although coconuts are abundant in tropical countries like those in Africa and South America, they are becoming more popular in other countries including the United States and Canada due to their many health benefits.

In this article, we are going to take a look at some of the health benefits of consuming coconut water and using (topical and otherwise) of coconut oil to the body.

Inside the coconut cavity is coconut water which is a natural reservoir of many healthy nutrients. The water from a fresh coconut contains no artificial substances like what you find in soft drinks, and is also clean making it a healthy and refreshing drink.? If you live in place where coconuts are scarce you can settle for bottled coconut water, which should be available in grocery stores.

The following are some of the health benefits which you can derive from consuming this refreshing drink:

While the most part of coconut water is made of water, the remaining part (about 6%) is made up of several nutrients and minerals including fiber, protein, carbohydrates, potassium, sodium, calcium, manganese, vitamin C, and magnesium.? These nutrients are vital to the body and the consumption of this drink is a quick way of giving the body what it needs.

While it is generally believed that dyspepsia or stomach upset is basically as a result of indigestion, there can be other underlying factors such as bacterial infections or allergies. Dyspepsia is usually characterized by an inflammation of the stomach lining leading to vomiting, bloating, and heartburn.

The inflammation of the linings makes it difficult for food absorption in the stomach and can result in nutrients being lost in the body. This is where coconut water comes into play; coconut water is known to have tannins, which are anti-inflammatory agents that can help to soothe the inflammation. Furthermore, the tannins and other chemicals in coconut have antimicrobial properties that can fight off the bacteria or fungi causing the stomach upset.

Unlike most other foods which contain high levels of sodium, which is an anti-diuretic and promotes the retention of fluids, coconut oil helps the kidneys to get rid of excess water.? Coconut oil contains high amounts of potassium which is a diuretic ? any substance that promotes the flow of urine. This helps to prevent kidney diseases like kidney stones. Apart from this, coconut water also contains an amino acid, arginine, which promotes blood circulation to the body organs.

It is believed in some circles that coconut water is more refreshing than pure water. Water form coconuts when drunk can rapidly rehydrate the body than pure water. ?In addition, since coconut contains many essential minerals such as magnesium, potassium, and sodium, it is also helpful in replenishing electrolytes which are based on these minerals.

During the Second World War, it is told that coconut oil was used for blood transfusions due to its identical nature to the human blood plasma. Even presently, coconut water is still given to persons who have blood shortage.

Coconut water contains soluble fiber which is essential for proper digestion. The main cause of constipation (lack of bowel movement) is inadequate fiber content in digested food. Thus, the consumption of coconut water is a natural and effective way of relieving constipation and promoting bowel movements. Moreover, yoga practitioners recommend coconut drink to start the day.

The presence of potassium in coconut water has so many advantages including helping to reduce blood pressure. ?While bananas are sometimes considered to be the biggest source of potassium, nothing could be farther from the truth as an 11-ounce serving of coconut water contains 0.6 grams of potassium compared to the 0.4 grams of a similar banana serving.

Accumulation of water in the body leads to an increase in blood volume and ultimately, blood pressure. In contrast to sodium, potassium helps to promote the flow of water, as have already been stated making it easy for the blood pressure to normalize.

Furthermore, the presence of arginine in coconut water also plays a role in helping to reduce blood pressure as the amino acid promotes blood circulation.

It has been proven that the excess consumption of high-caloric foods can increase the blood sugar levels; hence, it is advised that diabetes patients should stay away from such foods. The low-caloric content of the drink helps in controlling the ravenous appetite that is associated with diabetes. Besides, coconut water does not contain sugar, which makes it a safe and healthy drink for diabetics.

Good for the hair

If you have seen photos of women living in tropical regions, you will observe the sheen of their hair. There is a high chance that this shininess is as a result of coconut oil applied to the hair. Coconut oil when applied to the hair promotes hair growth while also making the hair to glisten. It is no wonder that many hair care products like hair conditioners and dandruff creams contain the oil. In addition to the shiny property of coconut oil, it is also helpful in reducing the loss of protein through hair loss.

Coconut oil is also a good remedy for damaged hair as it stimulates the re-growing process of the hair. Apart from the fact that this oil helps to reduce protein loss, it is also a good source of vital proteins that help to keep the hair in good shape.

Regular topical application of coconut oil to the head helps to get rid of dandruff from the hair as well as in protecting the scalp form lice.

Cooking with unrefined coconut oil has been found to help in shedding off weight. This is because the oil contains healthy fatty acids that give the oil its weight reduction capabilities. Even more, studies have suggested that obese women can benefit from coconut oil; coconut oil helps to increase body metabolism, thereby, increasing the rate of weight loss in overweight persons. This is evident in people living in regions where coconuts are common as they usually don?t have the weight problems people in the West face. Notwithstanding, you need to combine this oil with other weight reduction methods like exercising to get maximum benefits.

Digestion problems such as IBS (irritable bowel syndrome) and constipation can be alleviated through the use of liquid coconut oil. Coconut oil contains saturated fats which have antimicrobial properties that help in fighting off microorganisms responsible for such stomach problems.

The use of coconut oil for treating skin problems goes back to thousands of years ago when it was used in the prevention of dry skin. Coconut oil is beneficial in this way due to the fact that it is packed with antioxidants. Massaging the skin with organic coconut oil can help in the prevention of several skin problems. Even better, the topical application of this oil does not have any adverse effects on the skin like some other oils do. Other skin problems which can be treated with the use of coconut oil include dermatitis, psoriasis, and eczema. The effects of aging on the skin such as wrinkles can also be remedied through the use of this oil.

For oral and bone health

The teeth and bones are also included in the parts of the body that can benefit from coconut oil. This is because of the fact that coconut oil promotes the assimilation of calcium by the body.? Not forgetting that both the teeth and the bones require calcium for proper development. Tooth problems such as tooth decay can also be stopped using coconut oil.

Coconut oil is great for the heart

Coconut oil contains saturated fats which help in reducing the level of LDL (low density lipoprotein) or bad cholesterol in the body by converting it into good or HDL cholesterol. By so doing, this helps to keep the heart in a healthy state thereby, reducing the risk of heart disease.

For boosting the immune system

Coconut oil contains several helpful chemicals such as lauric acid, caprylic acid, and capric acid, which are powerful antimicrobial agents. Consumption of coconut oil is a natural way of strengthening the body?s immune system against diseases.

If you have a voracious appetite, you can control it by adding coconut oil to your diet. Research has shown that coconut oil contains medium and long chain triglycerides (MCTs) which can affect the way the body reacts to hunger. Studies have suggested that eating foods rich in these MCTs can help in curbing appetite.

Side effects of using coconut water and coconut oil

The use of coconut oil and coconut water for health reasons cannot be overemphasized; however, you might need to take consideration of some of the possible adverse effects of their use.

Bad for allergic people: Persons who are allergic to coconut are advised to avoid using coconut water and coconut oil as they can trigger allergic reactions in them.

Frequent urination. Since coconuts contain high amounts of potassium, which promotes urination, you might need to frequently visit the loo during the day if you consume coconut water.

Risk of heart disease. Coconut oil has been found to contain about 90% of saturated fats, which are considered dangerous to the health. Such fats can increase the level of bad cholesterols in the body, and have been linked with cardiovascular diseases and some other related health conditions. Therefore, it is advised that coconut oil should not be consumed in large amounts to reduce this risk.

Risk of electrolyte imbalance. Excessive consumption of coconut water or coconut oil can lead to an imbalance in the body?s electrolytes due to the high levels of potassium in the fruit.

Risk of hypotension. Since the consumption of coconut water can help to lower the body?s blood pressure, drinking the water with medication for hypertension can make the blood pressure drastically, leading to hypotension.

Like most natural treatment methods, the use of coconut water and/or coconut oil for medicinal purposes should be done after due consultation with a medical professional. Nevertheless, there is so much good to derive from coconuts that the side effects can be overlooked.