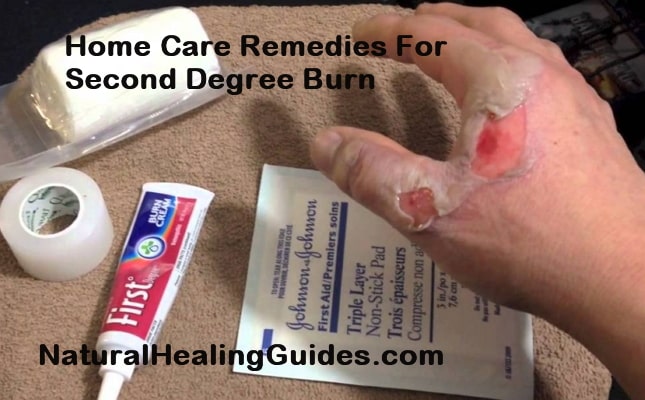 According to statistics, burns are ranked as fifth in the leading causes of deaths due to accidents, with an estimated death rate of about 3500 persons yearly.

A burn is any injury to the skin (or body tissues) that arises due to exposure to heat, chemicals, or radiation.

Burns are generally classified according to the level or extent of damage done to the skin. The more severe a burn is, the higher is the degree. Basically, there are three degrees of burn categorized as: first-degree, second-degree, and third-degree burns. Sometimes, the burn can go very deep, even into the bone tissues; this type of burn is called a fourth-degree burn. Since we are considering remedies for second-degree burns, our focus would be on this class of degree

What are second-degree burns?

Second-degree burns refer to any type of burn that affects the epidermis (outer skin layer) and part or all of the dermis (inner). This type of burns are marked by redness and swelling of the outer skin, with blisters also appearing.

A brief explanation of the other categories of burns is seen below.

First-degree burns: Burns of this type only affect the epidermis and are the least severe.

Second-degree burns can be caused by any source of heat such as the sun, chemicals, flames, hot water, and electricity.

Common symptoms of second?degree burns are:

Other home remedies that may help in treating second-degree burns

As far as the wound is clean and free from infection, second-degree burns should heal in about 3 weeks. Trying any of the above-mentioned home remedies can help to hasten the wound-healing process. Moreover, first- and second-degree burns usually require no medical treatment as they are not as severe as the other types.

However, if there are no improvements in the symptoms of the burn, you should visit a doctor.