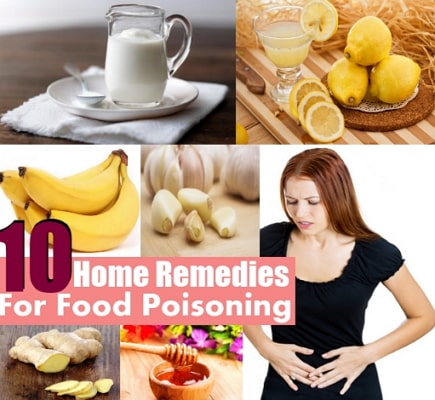 Home Remedies For Food Poisoning And Vomiting That Work

Food poisoning can occur when the preparation and preservation processes of meals are not properly carried out. But food could also have been contaminated long before preparation, like at the stage of planting and harvesting, at the point of storage and even at the point of transportation.

Foods which do not necessarily need to be cooked before consumption like some kinds of vegetables, sea foods and such are the most vulnerable to contamination by harmful organisms. Since they are not exposed to any kind of heat, infectious organisms which may get into these foods are fully active and could affect the body system negatively.

Depending on the nature and level of food poisoning, the symptoms may take days or hours to manifest in some and in others a couple of minutes to an hour. ?This condition in most cases is not life threatening and will pass after a while. But in some cases, especially with those at delicate ages or those who have delicate health conditions, it may become necessary for an affected person to go to the hospital.

The typical signs of food poisoning include: noisy abdominal movement, moderate or intense stomach and abdominal pains, frequent and watery stool, fatigue, nausea and even vomiting.

In cases where this condition goes on for more than a few days and is accompanied by other symptoms like: bloody diarrhea and bloody vomiting, persistent fever, excess dehydration and extreme body weakness, then it is definitely time to get to a hospital.

This condition can be prevented by putting certain safety measures in place. Foods are not to be left outside once opened or cooked as they get contaminated by germs. They should be properly stored and refrigerated.

Foods should be cooked properly and at the right temperature especially animal proteins like eggs, meat, fish etc. This will ensure all harmful organisms are killed before food consumption. Foods which do not require cooking should be thoroughly washed. Substances like lime and vinegar can be added to washing water and rinsed off after wards.

Always wash your hands and keep the cooking environment clean, during and after cooking. All cooking utensils should be cleaned before and after use to eliminate pathogens.

Avoid putting raw and unclean food beside foods which have been cleaned and are ready to eat. This is one of the easiest ways for foods to get contaminated and result in food poisoning. Wash your hands and properly clean equipment used for raw food before using them for ready-to-eat meals.

For a number of people, food poisoning does not always require a visit to the hospital except in special situations. After the initial basic symptoms of food poisoning shows up like vomiting, the stomach should probably be left to settle down for a bit, before commencing food poisoning remedies. Home remedies for this sickness can be carried out until the condition passes.

When experiencing food poisoning, the body loses a lot of fluids and energy. It therefore becomes quite easy for dehydration to set in. so take lots liquids like water, soups and tea. Liquids should not include the likes of alcohol or caffeinated drinks because they could further worsen this condition. A lot of researches point to the fact that, the right amount of water plays a key role in fighting sickness causing bacterial and maintaining the general health of the body. Liquids are of tremendous help to the body when battling food poisoning.

For the duration of this sickness, suspend the consumption of some foods. Avoid fatty foods, high-fat and creamy dairy products and spicy foods. These foods could further upset the stomach at this time.

Go instead for foods which are light and have a mild and soothing effect on the stomach. You can go with dry foods like toast and cereals. Meals like rice and plain potatoes are also acceptable.

Ginger tea is famous for its soothing and relieving effects on the stomach, which by extension, helps reduce vomiting and nauseating feelings. It contains antibacterial substances which aids the body?s fight against food poisoning organisms. Ginger can be grated and boiled in water, strained after boiling and allowed to cool before drinking. Honey can be added to this tea, not only for its sweetening ability, but also for its calming and antimicrobial abilities too.

Half a lemon can be added to a glass of water and consumed with or without honey based on personal preference. Lemons contain antioxidants which are good in acting against harmful germs and bacteria in the body.

Vitamin C aids the body in no small way in fighting against harmful sicknesses and diseases because it builds up the body?s immunity. Vitamin C can be gotten from foods rich in this substance or can be taken as supplements.

Above all, get enough rest and sleep so your body can properly fight the condition and heal itself.

Pregnancy is a very sensitive time in every woman?s life. Everything taken into the body should always be properly scrutinized to make sure no harm comes to the fetus due to wrong food, drinks and drugs choices. A pregnant woman is solely responsible for the feeding and nutrition of her unborn child; because the fetus feeds off the mother, whatever affects her affects the fetus even more due to its fragile nature.

Food poisoning during pregnancy may prove dangerous for mother and child depending on the severity. The condition has been known in severe cases to result in miscarriages and still birth and other health challenges for pregnant women.

Pregnant women are prone to food poisoning due to the alterations their bodies undergo in order to accommodate the fetus. So be careful in the choices of foods you make so as not to put yourself at further risk of food poisoning. Whatever food being taken in should never be raw or half cooked. Those who are pregnant should always good for foods which have been fully cooked at the right temperatures.

Food poisoning during pregnancy can be watched to determine its seriousness. If the symptoms are quite mild, then there might not be need to worry. Remain hydrated and get a lot of rest until it passes; but you should definitely still report this to your doctor possibly at a later date.

But if the symptoms are quite strong, then it is safe to get to the hospital immediately to avoid any form of danger and complications. Some types of food poisoning like E.coli and Listeria can seriously harm the baby.

Since it is better to be safe than sorry, if food poisoning is experienced at any point during pregnancy be it mild or serious, get to the hospital immediately. At the very least, get in touch with a doctor to get a professional opinion on the best line of action to be taken.

Humans are not the only ones prone to food poisoning animals are also exposed, even more so than humans. Dogs can get food poisoning from consuming contaminated foods or foods which are dangerous to their health like grapes, chocolate and such. In most cases, dogs also experience the basic symptoms of food poisoning which humans experience. This condition is most likely going to pass within a day or two. Just make sure your dog does not get dehydrated. Provide it with lots of clean water as it experiences this illness.

If this condition persists for more than a day or two, it means the condition is quite severe. At this point, the dog should be taken to see the vet for further professional help and treatment.

Vomiting is one of the most common signs of food poisoning. It may be mild or intense depending on the level and type of food poisoning. During this time of vomiting, stay away from heavy solid foods of any kind. Instead go for dry and light foods like bread, crackers, dry cereal.

Take little sips of fluids. A preferred liquid should be water or water spiked with lemon or lime. Little sips of herbal tea like ginger tea can also be of help in calming the stomach. As vomiting becomes reduced, then liquid content being consumed can gradually increase.

But in all these, note that food poisoning should not be left medically untreated when it lasts for more than 2-3 days.

Babies have very sensitive immune systems, as they grow and develop and interact with bacteria, their systems gradually build up immunities against harmful organisms. Consequent to the sensitive nature of the health and system of babies, they are quite vulnerable to food poisoning.

If food poisoning occurs, the baby should be breast fed in small amounts, at intervals, to prevent dehydration. After vomiting, a waiting period of about two hours is needed before resuming breast feeding. Breast milk contains several vitamins and nutrients which helps the body system of babies in fighting diseases.

If the baby is not being breast fed, but is placed on bottle formula, then little amounts of fluids can be given, at intervals. Oral rehydration solution can be administered, should vomiting and diarrhea persist.

If the symptoms of food poisoning show little or no signs of easing up after 24 hours, immediate medical attention is required. Whatever home remedies being applied at this time, should probably be done on the way to the hospital.

Always take food safety regulations seriously. Make sure whatever foods or liquids taken in are from clean and reliable sources.