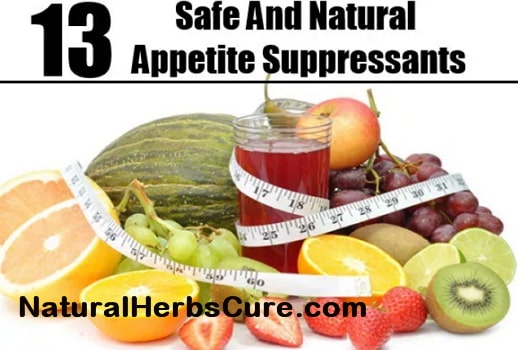 Going through a successful weight loss journey is not an easy task, it involves training both the body and mind and several other stringent activities, and one can not deny the role of ‘food consumed’ in weight gain or weight loss. This is where appetite suppressants come in, and even though they also exist as pills, the best approach is always the most natural approach.

Natural appetite suppressants could be food types, herbs or supplements that are capable of reducing the feeling of hunger and lower food consumption. They do this by stimulating hormones, slowing down the digestive process too, making ?an individual feel full for much longer and many other functions, all of which contribute to weight loss in the long run.

The use of green tea in treating several bodily disorders and ailments has been one that has been around for centuries. The nutritional contents and the health benefits this beverage offers are exceptional, and it is equally effective in reducing appetite and aiding weight loss. Primarily, green tea has components that help it to reverse digestive problems and detoxify the body, this along with other abilities such as insulin and hormone regulation all contribute to the feeling that makes an individual feel full for much longer and ultimately contribute to weight loss. Other herbal ingredients that suppress appetite and aid weight loss include ginger, turmeric and many of the commonly consumed herbal drinks and spices.

Foods rich is fiber have been found to be effectively capable of aiding weight loss as they often suppress appetite. This is because fiber as an element has a complex composition and is not easily broken down and digested by the body. This leads to the body burning more energy which equals fat and calories to burn it. It also keeps an individual full for much longer by slowing down the digestive process thus contributing to more weight loss. There are several varieties of fiber-rich foods such as fruits like bananas and mangoes, vegetables and solid foods like potatoes which serve as a healthy alternative to high carb foods it is, however, essential to consume with caution, especially in individuals with a history of digestive problems.

Saffron is a spice made from a popular plant called crocus, and although it’s main use is just that of a kitchen flavor Ant, and colorant, it has been found to have several other uses beyond that. This herb has the ability to aid weight loss and suppress appetite in the following ways. Firstly, saffron has been found to be capable of boosting mental health thus reducing the effects of depression which include overeating and inactivity which leads to weight loss. Also, it’s components have abilities which include reducing appetite by secretion of hormones that stimulate hunger and also boosting of energy levels.

The use of spices in day to day foods is a common phenomenon, but many individuals are ignorant of its health benefits, which also includes weight loss. This food types which are often characterized by their hotness include Cayenne Pepper, cinnamon, ginger and many others are rich in components such as capsaicin, which has been found to have significant effects on food intake, digestion and overall weight loss or weight gain. Including this spices in foods have results on the body such as suppressing appetite, stimulating fat burn through thermogenesis, regulation of blood sugar levels and boosting of overall health. Spices are one of the easily gotten and consumed food types and have very good ease of use. They are very effective in suppressing appetite and should be made a regular part of meals.

Proteinous foods are a suitable alternative to heavy carbohydrates which is often digested by the body quickly and has been found to contribute greatly to excess unhealthy fat. Protein on the other hand, which is found in foods like eggs, beans, yogurts, and other healthy sources contribute more health benefits with lesser side effects. Protein suppresses appetite and aids weight loss because like some other food elements such as fiber, it has a complex make-up thus taking the body more time and energy to digest it. This makes an individual feel full for much longer, a condition relative to appetite suppression and ultimately leading to weight loss in the long run. Another food type which has its use similar to that of protein in suppressing appetite is healthy fats found in natural sources such as healthy oils, nuts and other. These ingredients should be made a regular part of meals to enjoy maximum benefits.

However outrageous it may seem, dark chocolate is very effective in suppressing appetite and aiding weight loss in the long run. But this is not the commonly consumed chocolates often referred to as ‘candy’, as this food ingredients have high sugar and other foreign contents in them, which all lead to unhealthy weight gain. Dark chocolate, on the other hand, is made up of nothing less than 70% of natural cocoa in its entire makeup and so has little or no sugar, ultimately contributing to weight loss. Now how does dark chocolate suppress appetite. The first way it does that is due to its bitter taste that is somehow not pleasing; this reduces quench for sugary things and other types of food. Dark chocolate has also been found to contain components that inhibit secretion of hunger hormones thus keep and individual full for much longer. Dark chocolate is very healthy for long-term consumption and offers several other health benefits.

Over The Counter OTC Appetite Suppressants

These ingredients which have their primary purposes for suppressing appetite and aiding weight loss also come in the form of pills or supplements to allow for more potent, effective and easy usage. Some of the best over the counter appetite suppressants include:

Orlistat is one of the most used over the counter pills for treatment of weight loss, and it earned its federal approval in the late 90’s. Since then it has gone to dominate the market and is very effective in appetite suppressing and ultimately weight loss. Although it’s major function is to inhibit to absorption of fat in the body system, a function in which it is very effective at. This pill does not pose serious side effects if used with caution, although it is advised that individuals that are on it should avoid high-fat diets to avoid over absorption and side effects.

These two drugs are often combined and sold as a single product which is known as Qsymia. Its use is federally approved and is very effective in aiding weight loss. Qsymia stimulates the digestive process thus causing a reduction in appetite and food consumption or intake. To ensure effectiveness and efficiency, this drug should be accompanied with lifestyle changes and habits which can complement one another and lead to significant weight loss results.

Contrave is a favorite among many individuals hoping to lose weight quickly. This drug is made up of two varieties of hydrochloride which are bupropion and naltrexone. Individually, these drugs are very effective in suppressing appetite and aiding weight loss, and a combination of both offers a more potent effect. Contrave has a direct effect on the number of calories in the body as it stimulates functions which lead to more burning of it. Its intake is advised to be accompanied with a diet that is low in calories to achieve maximum results.

Lorcaserin is also known as Belviq and has its effects on appetite suppression and weight loss by stimulating secretion of hunger hormones. This reduces cravings in an individual by reducing hunger and making him full for a longer period of time, ultimately leading to significantly lower food consumption and weight loss in the long run. Lorcaserin which has earned federal approval after several positive tests and reviews offer quick results and can be gotten easily at pharmacies and local drug stores provided an individual has a prescription.

The drugs listed above are all federally approved and believed to be very safe for consumption. They guarantee quick results but should be used with caution as they could lead to serious side effects and long-term health consequences if misused. Self-medication is not advised for the use of these pills, and a professional prescription should be followed.

The use of this herb is one that has been around for a very long time and although there are no proper standard tests and experiments to prove its effectiveness it remains one of the most sought-after supplements for weight loss, owing its success to testimonies. This herb is very effective in reducing hunger and aids weight loss in the long run.

The use of CLA for aiding of weight loss process is a very effective one as long as it is used properly. This supplement has been found to boost bodily functions thus leading to burning of more calories, suppresses appetite and has a host of other health benefits which include reversing of inflammation and boosting of the digestive system.

Green tea is often prescribed by many health professionals due to its ability to not only aid weight loss but provide several other health benefits, all of which contribute to optimal functioning if the body system. Green tea helps suppress appetite, detoxify the body system and reverse bodily disorders such as arthritis amongst other things. It is a favorite for appetite suppression and weight loss because it can be used for a long period of time with few or no side effects at all.

Glucomannan is a form of fiber that is used for treating weight loss. It absorbs water in the digestive tract and helps bulk up food leading to a slower digestive process and more burning of fat and calories. This suppresses appetite as an individual feels full for much longer and also aids quick weight loss. It is, however, important to use Glucomannan with caution as its misuse could lead to several digestive problems.

Hoodia is an herb that has its origin in Africa. It is found in the desert areas as it occurs as a cactus-like plant. It is manufactured in liquid, powdered and fleshy form and is very effective in suppressing appetite. Although there has been no proper medical research to prove its effectiveness, studies on its users have shown signs of boosted weight loss when combined with other weight loss procedures. This herb should be used with professional consultation as it is often accompanied with serious side effects.

The consumption of herbs in liquid forms such as tea or drinks is one of the very effective forms of acquiring weight loss results. This is because it offers ease of use and is easily absorbed by the body. Some of the best herbal tea appetite suppressants include: