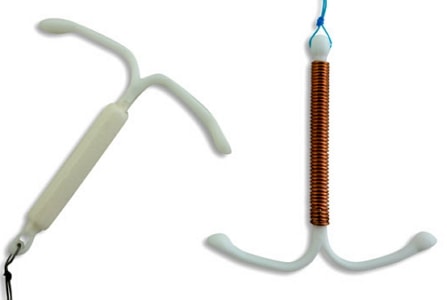 Intra-uterine devices or IUDs are long-term solutions for preventing pregnancy in women. While the use of other birth control methods like combination pills and condoms are more common, the use of IUDs is more effective and is becoming more popular among Western women. These devices which look like a small T-shaped anchor are embedded into the womb by a doctor and can stay there for many years.

There are two major types of IUDs: hormonal IUDs which help to prevent conception by stimulating the release of a progestin hormone called levonorgestrel, and non-hormonal IUDs that are made from copper and work by stimulating an inflammatory response that is bad for spermatozoa.

While there are different brands of hormonal IUDs including Mirena, Kyleena, Skyla, and Jaydess, there is only one copper (non-hormonal) IUD. The aim of this article is to look at the different brands, their benefits, disadvantages, and side effects.

Hormonal IUDs help to prevent conception by a continuous production of levonorgestrel which helps to thicken the mucus of the cervix in order to prevent fertilization. The major brands of hormonal IUDs are Mirena and Skyla which will be briefly reviewed.

Mirena is a type of hormonal IUD that offers up to seven years of effective protection against pregnancy. This IUD can be used by women having heavy and long periods.

The major advantage of using Mirena is the fact that it helps in alleviating heavy or painful menstruation. In addition, research shows that Mirena is 99.8% effective at preventing conception.

Skyla is another brand of hormonal IUDs but is specially designed for women who have not previously given birth. The main difference between Skyla and Mirena is in their sizes; Skyla is smaller than Mirena ? albeit by only a few inches. The other difference is seen in the way both device release hormones: Skyla releases fewer amounts of levonorgestrel than Mirena.

Skyla is approved for three years of effective protection which is quite shorter than what you?d get with Mirena. However, it means that this is the best option if you want a shorter-term contraception method than Mirena.

This is a newer brand of hormonal IUDs which can be used by women who have given birth before and those who have not. Kyleen sits between Skyla and Mirena in the levels of hormones released. This device is designed to last for five years and is recommended for women who want to keep having their periods.

Liletta is yet another brand of hormone-releasing IUDs that is best suited for women with a tight budget. The device releases the same amount of hormones as Mirena and can last for up to three to five years. Liletta releases few hormones daily and should be avoided by women who don?t want to completely get rid of their periods.

This hormone was produced by Kyleena Manufacturer. It releases same amount of hormone like Kyleena but lasts only for 3 years.

Hormonal IUDs offer the benefit of reducing heavy periods in women. With the different options available, women can also choose to eliminate their periods completely which is rarely possible with non-hormonal IUDs.

Using hormonal IUDs can help in alleviating painful cramps during menstruation. This is in contrast to copper IUDs that make the cramps worse.

The risk of pelvic inflammatory disease (PID) is reduced with the use of hormonal IUDs due to the thickened cervical mucus.

Every IUD type offers the benefit of effective and long-term prevention of pregnancy.

Side effects of hormonal IUDs

There are a few side effects of using hormonal IUDs. Some of the most common ones are:

The only brand of non-hormonal IUDs, for now, is the ParaGard IUD. There are a few advantages of using this type of IUD. While these devices have been checked for 10 ten year effectiveness, they can last for up to 12 years based on some studies.

After the successful insertion, the user can experience heavy periods with more cramps during the first three periods. However, everything gets back to normal afterward.

Some users claims to have experienced copper toxicity symptoms like coughing and breathing difficult although this is yet to be scientifically proven.

Some women may find the use of non-hormonal IUDs better than other birth control options due to the following reasons:

Copper IUDs are best for people who dislike the idea of hormonal birth control methods. Moreover, it is known that the symptoms of menstruation are the result of hormonal imbalance and the use of hormonal IUDs means that more hormones will be released. This makes ParaGard a good option for women suffering from hormone-sensitive ailments like breast cancer and heart diseases.

Whichever IUD type that you decide to make use of, they all offer the advantage of long-term effectiveness in the prevention of pregnancy. However, for ParaGard, users are assured of at least 10 years of effective protection ? studies show that copper IUDs can last for up to 12 years.

Unlike other birth control methods, the use of IUDs means that you no longer have to change your protection every month or the daily pill swallowing. IUDs are designed to be inserted into the uterus and left there until the need to get pregnant comes up again.

Side Effect Of ParaGard Copper IUD

Women with a copper sensitivity should avoid the use of ParaGard for preventing pregnancy due to the copper content.

All being said, it is important that you do your due diligence by understanding your body physiology so as to know what works for you; this means that you need to visit a physician before deciding on what type of IUD you should use.

I have personally tried the Copper IUD and Jaydess.

My Paragard lasted for 6 months because I developed Copper sensitivity while my Jaydess lasted only 2 days due to? nausea and vomiting.

The insertion was less painful than the hormonal one. Infact I enjoyed this copper IUD until I started gaining weight 4 months after insertion. I battled weight gain, terrible mood swing and copper sensitivity that materialised in non stop coughing, breathing problem for over 2 months before I decided to take it out.

All the symptoms varnished the same week I took it out. I lost 10 pound about 4 weeks later and since then, everything is back to normal.

After a while, I tried the hormonal one which ended in disaster.

My Jaydess Experience:? How Vomiting & Nausea Force Me To Remove It

I got my Jaydess last week Friday and on Monday, I went to take it out.

Everything went well after the insertion. Though it was more painful than the copper IUD, all the pain went away immediately after the procedure.

The worst happened the same morning I had intimacy with my hubby.

The act triggered the release of Levonorgestrel hormone into my bloodstream which resulted in nausea and vomiting.

At a point, I could not get up on the bed. I had to call an ambulance to take me to the emergency ward where the little device was removed.

Everything came back to normal immediately after it was removed.

After my horror ordeal with copper and hormonal IUDs, I decided to call it quit with IUD.

I believe the side effects outweigh the benefits…

Here are some natural birth control products am currently using.

This book is very good if you want to use natural birth control measures. I started using it last year and it is working for me and many other women out there.

Click on the above image for more information and how to buy it.

The second product am using is an Ovulation Monitor.. Click the image below to read more about it.