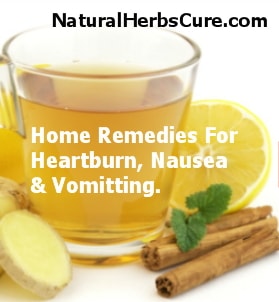 Not all irritations or inconveniences in the body system are caused by infections or diseases, most times these conditions are just they body’s way of correcting itself from our excesses. Heartburn, Indigestion, nausea and vomiting are examples of those experiences in which every adult has most likely experienced one time or the other in their life time.

Fortunately most times the body corrects itself without any external measures but there are also natural ways to ease these inconveniences and help recover faster.

Below is the list of home remedies that can be used to treat heartburn, indigestion, nausea and vomiting.

Heartburn is a common condition in which almost everyone of all ages is likely to have experienced in their lifetime. It is characterised by a burning sensation in the chest area and sometimes throat, and it is caused by a backwards movement of fluids from the stomach to the oesophagus. Most times heartburn is caused by little things such as bad diet, stress and dehydration but also it is caused by more serious health issues such as ulcer. Nonetheless there are quite a number of methods to treat heartburn at its mild stage without having to go over the counter.

Aloe Vera juice is very useful in dealing with heartburn because it contains some elements which help reduce inflammation in the stomach. The juice can be taken along with meals and result is guaranteed within minutes.

You might be wondering how chewing gum helps relieve heartburn when you don’t even get to ingest anything but it is actually one of the most efficient and easy ways to relief heartburn.

The way this method works is that chewing gums increases the quantity and flow of saliva within the oesophagus, a flow of saliva in high quantity helps to surpress the degree of acidity in oesophagus hence reducing heartburn. It is a method that can be used for adults and teenagers.

Vegetables are very efficient in reversing heartburn because naturally they are mostly alkalic substances. This property makes them efficient in balancing the highly acidic stomach and reduce the inflammation of the digestive tract hence stop heartburn.

Vegetables such as potato can be consumed as normal meals and one should begin to see results in only a few hours. Although it is preferable to prepare this vegetables and ingest them in the form of juice as this would enable faster absorption by the body and thus faster ending of the incommodiousness associated with heartburn.

Chamomile juice is an ingredient used by many to cure the problem of mild diarrhea but it can also be used to cure heartburn as it is very useful in correcting stomach irregularities and thus balancing the PH in the stomach making it less acidic and calming down irritations that persist as a result of such.

Chamomile is mostly prepared in from of tea and can be sipped on in between meals through out the day.

When talking of conventional methods that have existed for centuries ginger is certainly one of them and has been proved to work 90 percent of the time. Ginger can be taken along with meals as a sauce, ginger can be eaten raw or a tea can be made out of it.

Any if these methods and it remains equally effective. Another advantage of using ginger to treat heartburn I that it can be used for teenagers.

Almond is an edible seed which is gotten from the popular Almond tree. Almond is very useful in treating heartburn because it helps reduce acidity in the stomach.

It can be consumed directly and raw along with meals or can be eaten at any time during the day.

Indigestion is a common phenomenon among people of all ages but it is most prominent in people with bad eating habits. It is simply a disorder in the digestive system of the body and it is followed by a lot of irregularities such as bloating, uncontrollable bowel movement, weakness and a host of other symptoms.

Although the condition is mainly caused by bad eating habits it could also be as a result of food allergies, reaction to drugs and many other things. All the same it can be treated at its mild stage using some home ingredients and relief is guaranteed within a short period of time.

Baking Soda is one of the easily acquirable home ingredients that can be used to used effectively treat indigestion. This is because it contains some elements which make it suitable for reducing the acidic content of the stomach and also aids digestion.

To use baking soda, the ingredient is mixed with water and is ingested a few times daily, it is although important to note that baking soda should not be consumed in high quantity at regular intervals as this could lead to further upset in the stomach.

The use of basil leaves is a method that has its origin from the ancient times in India and has been proven to be very effective and reliable over the years. The leaves have properties which help aid digestion and most importantly reduce the inflammation in the stomach.

To use this leaves they can be boiled in water to create a tea out of them or a non conventional method of eating them raw.

Basil leaves are carminative which means that they make the individual using them to pass a lot of gas, so it is advised to use this methods when planning to reside in the comfort of your home.

Cinnamon has a wide range of uses and that also includes treating indigestion. The home ingredient contains some elements which are very effective in combating indigestion and also ease stomach Irritation.

Apart from that it also has powerful antibacterial and antifungal properties which make it suitable for curing other ailments along with indigestion when it is consumed. To use cinnamon, it is mixed with water and boiled to make a tea.

It is then advised to sip on it at various times in between meals. One should begin to see results in a short while using this method.

Apple Cider Vinegar is another ingredient that posses strong anti bacterial qualities which make it suitable not only for reversing effects of inflammation in the stomach by reducing acidity but also useful in killing of bacteria present in different areas of the digestive tract.

The ingredient is a common one in many homes and if not can be easily found in various local stores. Apple cider vinegar is often mixed with water and is then ingested into the body by drinking it.

The mixture should be taken in the morning or at nights daily and a positive outcome is guaranteed.

Nausea is a condition that precedes vomiting . It is a state whereby you feel sick and the irritation may end up making you lose contents of your stomach through the mouth, hence the term ?vomit?.

It is caused by a number of things which could be external or internal. Nausea and vomiting could be caused by stress, allergies, infection and many other reason but fortunately it is possible to diagnose yourself by studying the frequency and time intervals in which you experience it, or what you come in contact with which makes you experience it.

Some of the home remedies to reverse the effects of nausea and vomiting are:

This is the most important rule to follow when a person is experiencing nausea and it has gotten to the stage in which the individual has started to vomit stomach content.

It is okay to stick to water to get yourself hydrated but other liquid substances such as tea, lemonade drinks and a host of other are suitable to allow easy and more appealing consumption.

If the victims fails to stay hydrated this will most likely further weaken the body system and it might lead to a severe condition.

It is therefore important to keep yourself hydrated throughout the period in which you experience symptoms of nausea and vomiting.

Peppermint can be effectively used to treat nausea in different types of ways which range from aromatherapy, in form of tea or ingesting of the oil.

The use of aromatherapy is a favorite among many people and the process involves boiling the leaves in water then inhaling the steam it emits.

Research has shown that the people react to peppermint in different degrees and it may take longer in some than others to feel changes in their body system,, nonetheless it is a widely accepted method and? the use of peppermint does not possess any danger and can be used for both adults, teenagers and little ones.

The use of ginger is one of the methods in which adequate research has been carried out upon and it has been proven to be very effective in dealing with nausea.

The ginger can be taken in form of home made tea or manufactured tea bags can be bought at local stores. Not only can ginger be taken in from of tea one can also consume it raw by eating the roots.

Ginger can be ingested whenever you start to notice the symptoms of nausea. Other ingredients in which their use is similar to that of ginger include cumin and fennel which are common spices found in most households.

The aroma which lemon fruit emits contains element which are very efficient in reversing the effects of nausea. One if the advantages of using this method is that the victim does not have to ingest anything and it only requires inhaling of the aroma.

To use lemon to treat nausea and vomiting the peel around the fruit is removed in small quantities as to allow release the of the scent.

Lemon peel can be inhaled at different periods within the day when the victims starts to notice the symptoms.

Vegetables are essential to maintaining adequate nutrition and avoid the imbalances that occur in the body system. Most times nausea is often caused by bad diet or lack of some nutrients and elements needed for proper digestion and running of the body system.

Taking vegetables along with meals helps to prevent this and the frequency of nausea and vomiting will definitely be reduced drastically in the long run.

It is also a suitable method to help reduce nausea in pregnant women.

Heartburn, Indigestion, nausea and vomiting all have different reasons for happening in the body but sometimes they are all complementary symptoms to a more chronic illness. It is therefore essential that if this conditions persist when any of this methods have been used for days, or if they are accompanied with other irregularities severe abdominal pain, loss of weight, extreme weakness and others the victim should immediately see a medical professional.