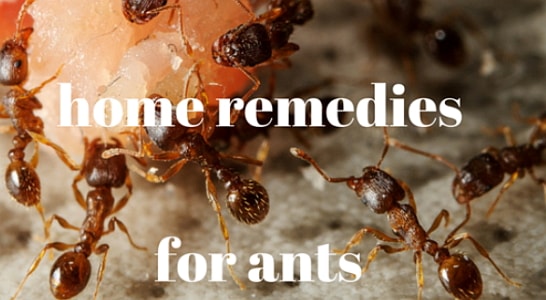 HOME REMEDIES FOR? ANTS : HOW TO GET RID OF ANTS IN HOUSE, KITCHEN , GARDEN PERMANENTLY

Ants are regarded as amazing creatures. Their ability to survive and evolve to accommodate all areas in which they find themselves has always been an awe to humans and they’ve been a topic of study for millennia. They are seen as extremely social creatures with exceptional strengths and teamwork, something the human race has tried to emulate over the years.

But at times this wonderful creatures are not so pleasing to be around. Their constant drive to survive and adapt to create their own colonies sometimes conflicts with the interest of man.

Their presence in areas of residence sometimes brings a lot of inconveniences such as damage to property, degradation of environment, damage to crops and some species are even capable of poisonous stings.

With all the facts listed above and a variety of species numbering to over 15000 you might be wondering if it is possible to end the menace of this organisms without breaking the bank, I am glad to tell you that there are numerous home remedies to get rid of Ants. Be it in your house, garden, place of work or even stores these methods keep this insects out if your private space.

Below is a list of home remedies to take care of ants:

Ants are social organisms that are constantly in search of sources of food. Those tiny crumbs you leave after eating or the drink spills which you think don’t matter a lot can be what attracts a whole colony to make an habitat in your place.

This insects feed on almost everything that is edible to man and this could include sugar, proteinous or starchy food and a host of others so it is important to deprive them of this.

It is advised to keep all places in the house dry and thorough vacuuming is very important in creating an environment that is not suitable for their survival.

Apart from attraction based on food, Ants like many small primitive organisms prefer to reside in areas that are humid and somewhat disorganised, this is the reason why they are mostly found in gardens or kitchen of houses so Inorder to keep them out it is best to keep this areas dry and clean at all times. This is the best approach and the least strenuous in the long run.

The use of boric acid is a very lethal method in eradicating ants as it can be used to destroy a whole colony. The ingredient contains element that are poisonous to ants and them being extremely social organisms makes the poison transferable easily between few Ants to the extent of affecting a whole colony.

To use this method the process starts with mixing the boric acid with any edible substance which you believe will be appealing to those insects. It is preferable to mix it with sugar.

After that, the mixture is placed in their paths and when they consume it it poisons them and death is certain within a short period of time. Another advantage is that most times these Ants carry the mixture of the boric acid in an attempt to take food back to their colonies.

With this method you can be sure that you will get rid of all ant infestations within a period of one week as long as you make sure you place the mixture in places in which the ants will come in contact with it.

Lemon juice is also very useful in dealing with ants as the smell acts as a natural repellant causing a disorder in their navigation system. It was mentioned earlier that ants are social organisms that always work and communicate together, the job of lemon juice is that it emits smell that is very disturbing to them hence they lose the ability to communicate with each other and move around. This is what makes the juice to be very efficient in dealing with these insects.

Another good factor attached to the use of lemon fruits is that its smell is also pleasant to humans and can be used as a day to day fragrance in the house.

Be it in the kitchen or rooms you can always count on lemon juice to perform the magic.

The objective of total eradication of ants using this method can be achieved in two ways, the first is getting the fresh lemon and spraying it all over the house by yourself or secondly you can just purchase the already manufactured sprays at local stores.

Both approaches are equally efficient.

If you are searching for a method that can be used in not only houses but also gardens without causing damage to your plants coffee is the best ingredient for you.

The use of coffee is similar to other methods as it emits a smell that is very repulsive to ants but the up side of using coffee is that it is not poisinous to both man and plants which makes it very suitable for use in gardens and lawns.

Coffee is an ingredient that is found in almost every home and can be easily put to good use. The best way to use coffee is to grind into powder and spread is around areas where you intend to keep ants out of, or simply spreading it in areas where you believe the ant colonies have been established. Although coffee does not cause the ants to die it strongly repels them with an overwhelming force capable of disorganising a whole colony.

So, if you have any old coffee powder it is a good choice to put it to use and tackle the infestation by ants.

Garlic is also very effective in getting rid of ants. It is preferable to get fresh garlic and slice into small pieces, the slices are then placed in areas where you precieve the presence of ants.

Garlic is quite known for its very strong scent and the good news is that it is very repulsive to ants. Although garlic does not kill them it is guaranteed that it will keep them out.

It can also be placed in gardens and lawns.

The downside of using garlic is that you will have to change the slices into fresh ones after a while to make sure that it remains potent but apart from that, in a matter of days change is guaranteed in your house or gardens.

You might be wondering how it is possible to use chalk to eradicate ants but I am glad to tell you that it is a very effective method of keeping them out of your space.

Chalk contains calcium and some elements that if perceived by these insects it diorganises their communication system and this is something that is very important to their survival. You might have come across the term ?pheromone?, it is a secretion made by insects such as ants to communicate with one another. Chalk clouds this secretion and so it is a very good agent in repelling them.

If you’re look for ways to completely kill and end the infestations by this insect, using of salt is a very efficient method in doing so. The effects of salt is similar to that of boric acid because when ingested by ants it deprives them of water in their system, in simpler terms salt completely dries them out.

To use this method salt is sprinkled in all areas in which you perceive their presence and an advantage it has over boric acid is that it does not have to be mixed with any food for the ants to ingest it or carry it.

Using if salts last longer than many of the other methods because it retains its potency for a long period of time.

Bay leaves are useful in taking care of different insects such as bed bugs, cockroaches and also ants are included. The leaves emit a very strong odour which is completely intolerant to ants.

Bay leaves can be used in two ways and both are equally efficient. The first includes placing the freshly cut leaves in areas where ants are believed to be, the odour from the leaves repel them and eventually they will have to find host in another place.

The other approach to the use of bay leaves is a more preferred one among many people, it involves drying the bay leaves and grinding them into a powdery form. The powder is then sprinkled along various edges, door and garden in which you plan to keep the insects out

It is a common fact that ants are extremely attracted by sweet things, their favorite being sugar. This is another obsession that can be used against them. Aspartame which most people know as sweetener is used by many people because it is calorie free but it can be used to get rid of ants in a very subtle manner. The ingredients attracts ants due to its similarities to sugar and then when it is consumed by them it leads to extreme famishment ultimately resulting to death.

Although to use this method aspartame might be needed in significant quantity, but results are guaranteed.

Cinnamon is a very common spice that is used in many homes but it can also be used in keeping ants out of your homes and gardens. It can be used in form of powder or oil.

The procedure of using cinnamon includes sprinkling it along edges of places we want to keep ants out, this could be your houses, offices or even lawns. The scent emitted by cinnamon is very pleasing to most people but is deadly toxic to ants. Cinnamon is easily acquired for a cheap price in local stores.

The use of peppermint is very similar to that of cinnamon as they are both spices used by humans and they emit smell that is very repulsive to ants. To use peppermint is a vet simple process and it involves just sprinkling the spice in the areas where you hope to keep the ants out.

If the ants have already established colonies in your private space, peppermint can still be used by sprinkling it on their base, the smell repels them and eventually they will abandon that host and leave.

These are various remedies to get rid of ants by using home ingredients that are easily affordable and are acquirable at local stores. Another advantage of using this methods instead of industrially manufactured insecticides is that most of them are not harmful to humans and preciously cultivated plants.

So, take advantage of this key points and build the suitable environment you desire for yourself and your family.